Kirtland’s Elija Martinez is heading back to the National Silver Gloves boxing tournament. 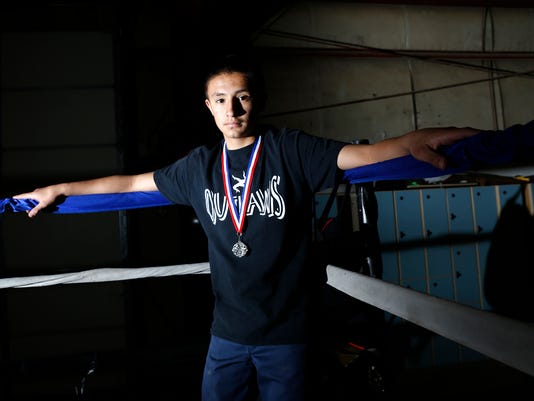 Elija Martinez poses for a portrait on Friday at the 505 Fight Factory in Farmington. Martinez will travel to Independence, Mo., to compete in the National Silver Gloves boxing tournament.(Photo: Jon Austria/The Daily Times)Buy Photo

Martinez, 13, earned a spot at the national event — which will be held Wednesday through Saturday in Independence, Mo., — after winning the Region 8 tournament in Ontario, Calif., earlier this month.

Fighting at 125 pounds, Martinez beat state champions from California and Arizona to win the regional title.

In the semifinal against California’s state champ, Martinez found his range and timing near the end of the first round, and went on to control the match through the second and third rounds to win by decision.

“It was a good fight,” Martinez said. “The California kid gave me a run for my money, but I was able to get the win.”

With the victory, Martinez advanced to the final, where he dominated his opponent, scoring a first-round knockdown after connecting with a straight left. He went on to win by decision.

This year’s trip to nationals will be the third straight for Martinez. The previous two trips to nationals ended with Martinez finishing third, losing to his division’s champion both times.

“I’m super proud of him. I’ve watched him go through the hard times, and now I get to see him enjoy the rewards,” said Eli Martinez, Elija’s father and trainer. “When we started, we didn’t know much about boxing. We kind of just jumped in.”

Through his first 18 matches, Elija Martinez only picked up three wins. Since then, Martinez has stepped into the ring 46 times, winning 41 fights during the last two and a half years to bring his overall record to 44-20. And the five loses that came during that stretch were all at national events.

The turning point for Martinez came a couple of years ago when he won the outstanding fighter award at an event in Albuquerque, beating a fighter from Johnny Tapia’s gym in the final.

“In the last couple of years, it’s gone from people not thinking he’d be around for long, to really being recognized as the best in the state, even among the open-class fighters,” Eli Martinez said of his son. “After that, he got confidence, and there’s been no stopping him since then. It’s amazing how that boost of confidence turned him completely around.”

Region 8 has won the last 21 team titles at the National Silver Gloves tournament, with Martinez contributing to the last two titles.

While being part of the championship team is an impressive accomplishment, Elija Martinez said adding an individual championship to go with a team title is his ultimate goal.

“I’m thankful for being a part of Region 8 and being champs with the rest of the team, but hopefully I can win this one (an individual title) and a team title with them, too,” he said.