Fighting cancer on every strenuous mile

Texas 4,000, which stopped in Farmington, is a non-profit cycling group riding from Texas to Alaska to honor those affected by cancer.

Fighting cancer on every strenuous mile

Twenty-eight cyclists, who departed from Farmington on Thursday, are riding from Austin, Texas to Anchorage to honor those affected by cancer. Wochit

FARMINGTON – Twenty-eight cyclists are making the long, arduous journey from Austin, Texas, to Anchorage, pushing through pain to honor those affected by cancer.

The non-profit group, named Texas 4,000, departed from San Juan Regional Cancer Center today enroute to their next checkpoint in Gallup — but not before making a sizable donation to a local organization.

The cyclists are students from the University of Texas. All of them have been touched in some way by the disease. Some are riding for friends and loved ones who were diagnosed. Others are riding as therapy amid their own bouts with cancer.

Noa Farou, 21, who’s been cycling since she was 10, was diagnosed with the early stages of cervical cancer two weeks before the group left Austin.

“This is something that’s fully treatable. In a lot of cases, it’s not,” said Farou, who also lost her great-aunt and grandfather to cancer. “Some of the hills are really strenuous on me. I believe that there is a lot of purpose and intention out in the suffering that people go through, the timing that it happens. To be surrounded by a community like this while I’m going through this, there must be a reason.” 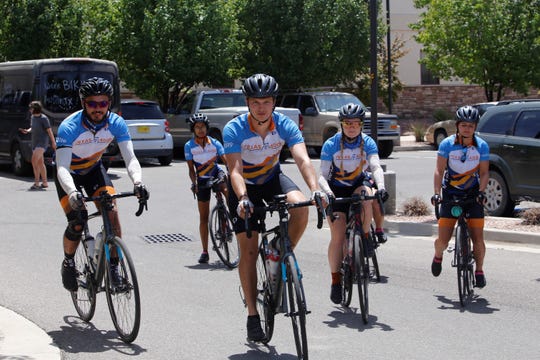 The cyclists left Austin on May 31, eventually reaching Farmington on the evening of June 12.

"That's a lot of hills. Just coming into town when you come off of (U.S. Highway) 64, you still have to ride hills," said Susan Steinhoff, Executive Director for the San Juan Medical Foundation.

They’ll make stops in Gallup, Holbrook, Arizona, and Flagstaff, Arizona, respectively, over the next three days.

The cyclists are averaging 86 miles per day during this endeavor, sometimes riding more than 100 miles between rendezvous points.

The group makes a large donation to an organization at each planned stop. In Farmington’s case, they donated a check worth $10,205 to the Connelly Hospitality House, which provides lodging for cancer patients.

“(They’ve) spent the whole year training to ride, raising money for people they don’t even know, in communities they’re never been in,” Steinhoff said. “Each of these riders, their stories are unbelievable.”