'Eagle soars to victory in All American Futurity

Jockey Esgar Ramirez picked up two victories in as many days, riding Imperial Eagle to victory during Monday's Futurity.

'Eagle soars to victory in All American Futurity 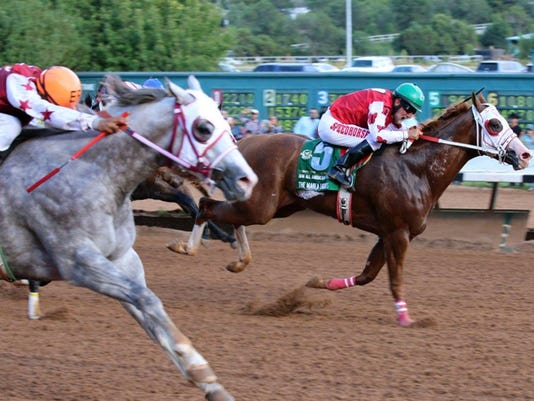 Imperial Eagle, outside, with Esgar Ramirez aboard, closes strongly to narrowly prevail over The Marfa Lights and jockey Larry Payne in the $3 million All American Futurity on Monday at Ruidoso Downs Race Track and Casino.(Photo: Courtesy of Richard Chamberlain)

RUIDOSO DOWNS — This was a good weekend to be jockey Esgar Ramirez.

One of the leading quarter horse-riders in the southwest and a little more than 24 hours after guiding Ec Jet One to victory in Sunday's $2.4 million All American Derby, Ramirez rallied Imperial Eagle down the center of the racetrack to win today's $3 million All American Futurity at Ruidoso Downs Racetrack and Casino.

Owned by 83-year-old North Carolina retiree Charles Robinson and trained by Tony Sedillo, Imperial Eagle wore down The Marfa Lights in the final yards of the 440-yard Futurity, winning by a neck and verifying his status as the race's fastest qualifier when trials were held here on the weekend of Aug. 19 and 20.

A California-bred gelding by One Famous Eagle, Imperial Eagle was sent off as the mild favorite on the toteboard at odds of 3-to-1. His victory was worth $8 to his winning backers at the windows, with $1.5 million going to the career earnings of the winner, who now has won four straight races.

The All American is the first stakes victory for Imperial Eagle, bred by Fredda Draper. In his only other stakes race, he was moved up to second place in the West Texas Futurity in April at Sunland Park. It is also the first All American victory for Sedillo.

Draper is the widow of Carl Draper, who saddled All American Futurity winners DM Shicago (2004) as well as  Heartswideopen (2007).

"I had a clean trip," Ramirez said. "My horse broke really good. Everybody was hollering and he tried to beat the gate, but he still got a real good break. (Coronas First Diva) was in front of me a neck at most, and I asked my horse to keep going. The longer he goes, the better he gets."

For Ramirez, it's his second lifetime victory in the All American Futurity. In 2010, Ramirez guided Mr Piloto to victory for trainer Felipe Quintero.

The Marfa Lights took over the top spot midway down the stretch, but was worn down by the winner in the shadow of the wire, finishing nearly a length clear of third.

Ridden by Larry Payne for trainer James Helzer, The Marfa Lights was making his first start in a stakes race after winning his trial here by nearly three lengths.

Coronas First Diva had the lead shortly after the start. The Oklahoma-bred filly, with James Flores aboard for trainer Charles Shults, got tired in the final yards and had to settle for third, just ahead of fourth-place finisher and morning-line favorite Apolltical Chad and jockey Adrian Ramos.

Trained by Wes Giles, Apolltical Chad veered outward shortly after the start but found a good stride late winding up nearly a length clear of the rest of the field.

Behind Apolltical Chad across the wire were Magical Jess, Koolnfamous, Volcoms Lady, One Famous Beau and One Hot Habit. Gamey Tee Cos was scratched earlier in the day.

The Futurity is the traditional closing day feature at Ruidoso Downs Racetrack and Casino. Live racing in the state of New Mexico continues at the Downs at Albuquerque, with a new season at Zia Park in Hobbs opening on Saturday.