Smack Smack prevails under the lights

Smack Smack prevails under the lights 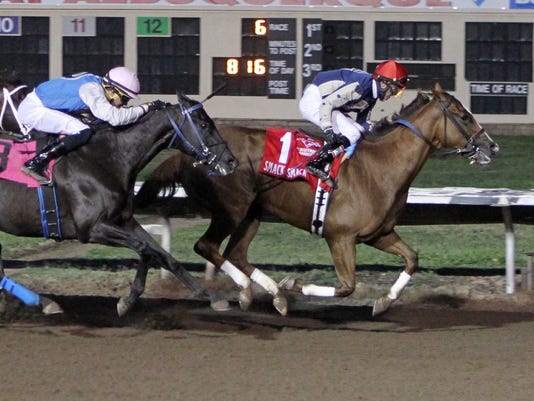 ALBUQUERQUE — The well-traveled Smack Smack conquered another facility in winning the $175,000 Downs at Albuquerque Handicap today in a thrilling stretch drive under jockey Shane Laviolette.

While racing on the inside lane, Smack Smack briefly gave up the lead when approaching the far turn before Laviolette wrestled the lead back. As the field hit the top of the lane, those three horses battled on nearly even terms.

“I made a move on him to keep my position on the inside,” Laviolette said. “Down the lane, he did his business.”

Smack Smack, a stakes winner last time out at Prairie Meadows in Iowa, and also a stakes winner last year in Oklahoma and at Zia Park in Hobbs, battled courageously in the stretch. He held off the late rally of Forest Mouse and jockey Ry Eikleberry, scoring by a half-length and winning for the 10th time in 27 career starts. He raced the 1 1-8 miles in one minute, 49.9 seconds.

Smack Smack, making his career debut over the course, was sent off as the 6-to-5 post-time favorite in the Handicap and returned $4.40 to his winning backers. Forest Mouse finished well on the outside to get the place ahead of Code West, finishing third ahead of Overland Park.

A Kentucky-bred, 5-year-old gelded son of Closing Argument, Smack Smack appeared to get into some contact with a tiring Overland Park in deep stretch. Stewards looked at the replay of the race and made no change to the original order of finish.

Saturday’s victory in the Handicap — the richest thoroughbred race of the current season at Albuquerque Downs — pads the bankroll for Smack Smack’s connections to lifetime earnings over $851,000.

Behind Overland Park in the order of finish were Spectacular Array, Ol Winedrinker Who and Pain And Misery. Morning-line favorite Shotgun Kowboy was scratched earlier in the day.

Racing resumes Sunday at Albuquerque Downs with another quarter horse and thoroughbred live racing program, which has a first post time of 1:30 p.m.