Infinite Bull gets up in time

Infinite Bull gets up in time 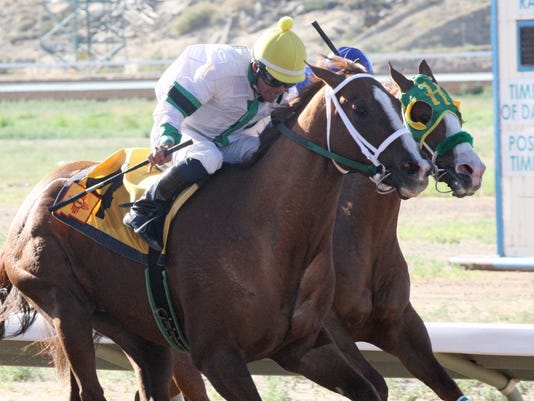 Smartly ridden by Norberto Arroyo Jr., Tucumcari Thoroughbreds' Infinite Bull rallied past a stubborn, but leg-weary Swiss Chris inside the final 50 yards before holding off a late rally from Weappear to score as the post-time favorite in today's $35,800 NMHA Stakes at SunRay Park and Casino.

Trained by Greg Green and saddled by his assistant Dan Morales, Infinite Bull raced in third down the backstretch of the 870-yard dash and trailed Swiss Chris and jockey Ricardo Jaime by nearly three lengths around the far turn.

As the field hit the top of the lane, Infinite Bull gradually closed the gap on Swiss Chris, but was hounded by a late-charging Weappear and jockey Frank Reyes.

"I had a good look at the winner on the turn," Arroyo said. "We had a lot of horse in the final part of the race."

Infinite Bull, scoring his second-career stakes win, wound up a neck ahead of Weappear, who was a length clear of Swiss Chris for the place. The final time for the 870-yard distance was a quick 45.12 seconds.

"We've been fortunate with him," Morales said after the race. "He's liked it here in the mornings, so we thought he'd handle the race well."

Infinite Bull picked up his sixth win from 16 career starts. He earned more than $21,000 for his connections, bringing his career earnings to more than $183,000.

Sent off as the 2.1-to-1 favorite, Infinite Bull returned $6.20 to his winning backers.

The win snapped a long losing streak for the state-bred 5-year-old. His most recent victory came nearly 14 months ago at the Downs at Albuquerque. Prior to that, Inifinite Bull earned his first stakes win in March 2015 at the Mt. Cristo Rey Handicap at Sunland Park.

Morning-line favorite Beau Wizer was scratched earlier in the day.

A field of five New Mexico-bred juvenile thoroughbreds will head to the gate for Saturday's $33,800 Totah Futurity. Running at a distance of four-and-a-half furlongs, the Totah Futurity will be part of a strong program, which has a first post time of 1:15 p.m.

Steve and Bessie Prather's Ignored, the 7-to-5 morning-line favorite in the Totah, will be seeking his second straight stakes win in the race.

Trained by Todd Fincher and slated to be ridden by Arroyo, the state-bred son of The Way Home drew clear for a convincing win last month in the $125,000 Copper Top Futurity at Sunland Park. With earnings already topping $64,000 in just two starts, Ignored appears to have an edge on his four rivals.

Ignored will break from the No. 2 post in the Totah, which has a scheduled post time of 4:03 p.m.

The main rival for Ignored will likely be Happy Hennessy, who finished third in the Copper Top. The son of Roll Hennessy Roll is winless in two starts but gets the services of Alfredo Juarez Jr., SunRay's leading thoroughbred rider.

The Totah will go as the eighth race on the card.