Juarez laughs it up aboard 'Humor

Coming back to the races after last month's injury, jockey Alfredo Juarez Jr., appears to be back to his dominant ways.

Juarez laughs it up aboard 'Humor 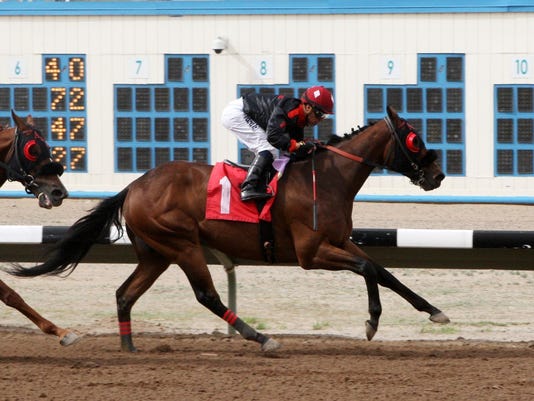 Redneck Humor, ridden by Alfredo Juarez Jr., crosses the wire a length ahead of the field in Saturday's $34,400 Inaugural Handicap at SunRay Park and Casino in Farmington.(Photo: Courtesy of Coady Photography)

FARMINGTON — After suffering an injury in a racing accident last month, jockey Alfredo Juarez Jr., has returned and appears ready to dominate the jockey standings at SunRay Park and Casino.

Juarez, one of the leading thoroughbred riders in the region, rode four races on the Saturday card and won all four times. One of his most dominant performances was his wire-to-wire win aboard Redneck Humor in the $34,400 Inaugural Stakes in front of a crowd of nearly 1,600 fans in Farmington.

Trained by Justin Evans for owner Earl Neugebauer, Redneck Humor took control of the 6 1-2 furlong dash right out of the break. Starting from the inside post in the six-horse field, Juarez put Redneck Humor on the front end with stablemate Alsono close by for much of the race.

Down the backstretch, the field raced into a stiff headwind, gusting as high as 45 miles per hour during the latter half of the card. Juarez, who was injured in a spill on March 22 at Sunland Park, kept his cool during the blustery conditions.

"It's very hard to ride in those conditions," Juarez said. "You really have to take a firm hold on everything or else you're gonna lose it."

Redneck Humor and Alsono raced as a pair from the far turn to the head of the stretch before Redneck Humor inched away to score by a length. He won as the 2-to-5 favorite, stopping the clock in one minute, 18.03 seconds.

A 5-year-old son of Da Stoops bred in Florida by the Jacks Or Better Farm, Redneck Humor has made a name for himself since being transferred from the Sunshine State almost a year ago.

With the Inaugural now under his belt, Redneck Humor has won five times from eight starts in New Mexico. Prior to the Inaugural, his most recent win was his first in a stakes race on March 20 at Sunland in the Bill Thomas Memorial Handicap. Saturday's win increases his career earnings to over $174,000.

Alsono settled for the place, nearly two lengths of Zack's Dash. Following that one across the wire were Wed Too Quick, Senator Robert and Hay Man Mark.

Juarez and Evans teamed up for another win on Saturday, scoring with romping winner Justina. Juarez also won races for trainer Dan Dennison, aboard Cee's Joy, as well as trainer David Kiser, who saddled Compete Everyday.

Live racing resumes at SunRay Park and Casino this afternoon with a nine-race program set to begin at 1:15 p.m.