Unfinished Biz made a strong first impression Friday, prevailing by a head in the $36,785 Animas Quarter Horse Stakes. 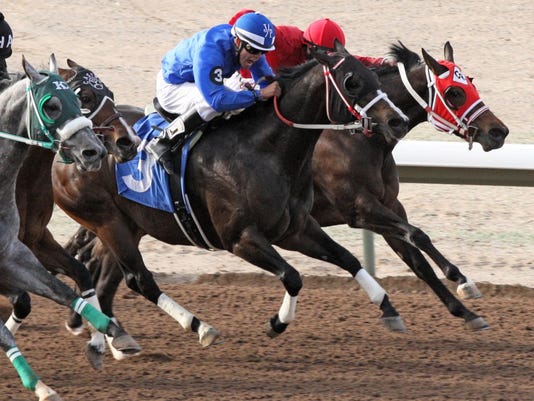 FARMINGTON — Unfinished Biz made a strong first impression at SunRay Park and Casino, dueling for the lead throughout and prevailing by a head in a thrilling edition of Friday's $36,785 Animas Quarter Horse Stakes.

Ridden to victory by Sergio Dominguez for trainer Cody Reynolds, the Texas-bred, three-year-old daughter of Captain Courage broke well from the starting gate. She battled for the lead with stablemate Phoebesdynasty and then held off the late rally of heavily favored Rg Miracle to post a moderate upset in front of a strong crowd of nearly 1400 fans.

Unfinished Biz was making her local debut for owners Bill and Susan Nice after a pair of strong efforts earlier this year at Sunland Park. She broke her maiden on Jan. 1, then most recently, finished a strong second against allowance company on March 4.

Making her stakes debut in the Animas, Unfinished Biz was sent off as the second longest shot on the board at odds of 16.40-to-1. She ran the 400 yards in a time of 19 minutes and 62 seconds while winning for the second time in nine lifetime starts.

Rg Miracle, sent off as the even-money favorite for trainer Ken Grisham, finished strongly down the center of the course, but never was able to get in front of the winner.

The second-place finish marks the ninth time from 10 starts that the New Mexico-bred son of Hearts Miracle has finished either first or second.

Ridden by Jose Enriquez, Rg Miracle finished a head in front of Phoebesdynasty, while Tres Diamantess, Thru The Night, Sweet Splenda, Una Linda Corona and Jess Dashn rounded out the order of finish. Witman was scratched earlier in the day.

Trainer Justin Evans will send out a pair of runners in the Inaugural, including Alsono, a two-time winner over this course and earner of more than $301,000.

Slated to be ridden by Alejandro Medellin, Alsono drew post position 3 in the Inaugural and has been installed as the 2-to-1 morning-line favorite.

Among Alsono's five rivals in the Inaugural is his stablemate Redneck Humor, the 3-to-1 second choice, who drew the rail with Alfredo Juarez Jr., scheduled to ride.

Redneck Humor, coming off an impressive win last month at Sunland Park in the Bill Thomas Memorial Handicap, is scheduled to make his local debut in the Inaugural. A five-time winner from 15 starts, the Florida-bred son of Da Stoops drew the inside post.

Today's Inaugural Handicap is scheduled as the eighth race on a nine-race card that has a first post time of 1:15 p.m. The Inaugural is scheduled to arrive at the starting gate at 4:03 p.m.

Racing at SunRay Park and Casino will be held four days a week, Friday through Monday until June 20. Weekday first post times will be at 3 p.m., with weekends starting at 1:15 p.m.