A 'Rose blooms again at Sunland

A 'Rose blooms again at Sunland 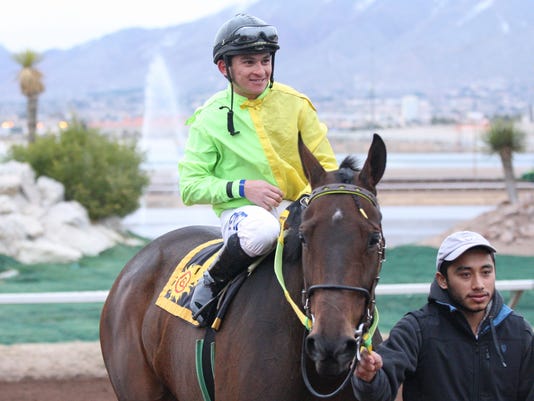 SUNLAND PARK — Breaking a three-race losing streak and returning to her favorite racetrack, Judge Lanier Racing Stables African Rose was back in the winner's circle with an impressive victory Saturday in the $65,000 Bold Ego Handicap at Sunland Park and Casino.

African Rose weaved her way between horses just after entering the stretch, then pulled clear of runner-up Chanteline inside the final 100 yards. She posted a 2 1-2 length victory, racing 5 1-2 furlongs in one minute and 3.32 seconds.

Trained by Miguel Hernandez, African Rose earned her 17th lifetime win from 40 starts and her 10th win from 19 starts over this course. Her last trip to the winner's circle came on Sept. 15 at the Downs at Albuquerque. Since then, she was well-beaten in two of her three most recent starts at Zia Park. She last handily at the Zia Park Distaff on Nov. 25, and at the Oct. 5 Chaves County Handicap.

African Rose, a seven-year-old Florida-bred mare by Bwana Charlie, increases her career earnings to over $521,000 with the win. Sent off at odds of 6.40-to-1, she returned $14.80 to her winning backers.

Chanteline, sent off as the 9-to-5 post-time favorite while making her first start in New Mexico for trainer Steve Asmussen, was clearly second best with Glen Murphy on board. They were followed by third-place finisher Cassy Sue and Untraveled.

Behind those four were Call Me Sandy, Naomi, Belleofthebeach, Cat Trap and Small Moves.

Teed Off Stable's Belleofthebeach, the morning-line favorite in the Bold Ego, was close up early in the running, but was under a drive at the head of the stretch and was beaten more than five lengths by the winner.

When Jrc Callas First was named world champion quarter horse by the American Quarter Horse Association for his efforts in 2014, he could not count the championship at Sunland among his victories.

The Texas-bred son of Winners Award tasted defeat only twice in 2014, including a fourth-place finish in the Grade 1 event that traditionally wraps up the calendar year. Today, he’ll be looking to avenge that loss in the $350,000 race in which he has been installed as the 2-to-1 morning-line favorite.

A 15-time winner from 24 career starts, Jrc Callas First is coming off a stirring win last time out in the Grade 1 Zia Park Championship on Nov. 25. Trained by Brain Stroud, Jrc Callas First may be in line for a second consecutive AQHA championship if he can win today, which would be his fifth straight victory.

A win today might also propel Jrc Callas First to a second consecutive world champion quarter horse award. He's expected to break from post 7 in the 10-horse field, with his regular pilot Damian Martinez back on board.

Zoomin Effortlessly, owned by Perrett Telesforo, will be looking for his sixth consecutive win when he goes to the post as the co-third choice on the morning line at odds of 5-to-1.

A four-year-old gelded son of Zoomin For Bux, Zoomin Effortlessly comes into the championship fresh off a rousing win in the Grade 1 Refrigerator Handicap at Lone Star Park in Grand Prairie, Texas.

Zoomin Effortlessly will break from post 3 in his first career start at Sunland Park, and will once again be ridden by Santos Carrizales.

Salvador Martinez will have the mount aboard Jess Featureme Quick, listed at 6-to-1 on the morning line breaking from post 5.

The combined field for the championship possess earnings of over $3 million.

The Grade 1 Championship is scheduled to reach the starting gate at 4:10 p.m.

In addition to the Championship, Sunland Park will also feature three strong quarter horse stakes races. The $250,000 Winter Juvenile Championship Invitational, the $85,000 Lou Wooten and Sydney Valentini Handicap and the $85,000 Challenger Six Handicap will also be on the card.

Bred in Oklahoma, BV Midnite Express won the All American Juvenile on Sept. 7 at Ruidoso Downs and the Heritage Place Futurity at Remington Park in Oklahoma City last May.

The Winter Juvenile Championship Invitational is the eighth race on the card with a scheduled post time of 3:44 p.m.

Because the race was originally scheduled to be run in 2015, it will still count towards potential juvenile awards despite the fact that all horses are technically three-year-olds.

The Wooten and Valentini Handicap, restricted for older New Mexico-bred fillies and mares, is headlined by the brilliant Astica, a five-time winner from six starts this year.

In her most recent start, the three-year-old filly by Jesse James Jr., stumbled coming out of the gate and ended up snapping her six-race win streak. She'll break from post 8 in the 400 yard dash

D E Wagons Strawfly will be looking for his 10th career victory when he goes to the post as the 5-to-2 morning line favorite in the 870-yard Challenger Six Handicap, which has a scheduled post time of 2:52 p.m.