Munoz won the first battle, pinning Box 25 seconds into the third round, in what could be a state championship preview in the 126 girls division.

Munoz pinned Carlsbad's Cady Box in the semifinals, took down Gallup's Neveah Young in the finals to win the title Friday at Lillywhite Gym in Aztec. Wochit

AZTEC – Both Makayla Munoz and Cady Box knew the gravity of what a head-to-head battle meant in the bigger picture of New Mexico’s girls wrestling scene.

The winner would secure a signature victory and find out where they currently stand among the state’s elites. The loser would know they’d likely encounter them again at state and would have to push past them to win a title in the 126-pound division.

Munoz went on to top Gallup’s Neveah Young by a 12-3 major decision to win the title, while Box stormed back with two straight consolation victories on pins to take third place.

"It was awesome to wrestle (Box). I loved it. I can't wait to face her next time," said Munoz, who improved to 26-0 this season.

Munoz handed Box her first loss of the season, all because Box’s left leg slipped back and out just seconds into the third period. Munoz then pivoted slightly left and overpowered Box.

For the better part of the match, however, Box gave Munoz plenty of trouble.

While in neutral position, Box kept grabbing the back of Munoz’s neck during the first period and didn’t let go.

Munoz managed to break free of Box’s grasp each time, and it was on.

Munoz and Box flipped and spun each other around, trying to somehow gain the upper-hand.

Munoz then swung her left leg up and propped herself up off the ground. She then saw Box’s left leg slip, trapping that same left leg and Box’s lower right shin together.

“She had both of her legs on one of mine. I saw an opportunity, and there was room to move in. And I was willing to take that risk,” Munoz said.

Although Munoz won the first battle, the war is expected to continue come state tournament time next month.

“It feels pretty good (to go that far), to grow so much to that level and to push (Munoz) that hard. I think I can take her (next time). I think she was the hardest opponent I’m going to have all season,” Box said, adding she will work on getting her hips up more often when on the ground. “It gave me a visualization of what I have to do to get myself ready to win state.” 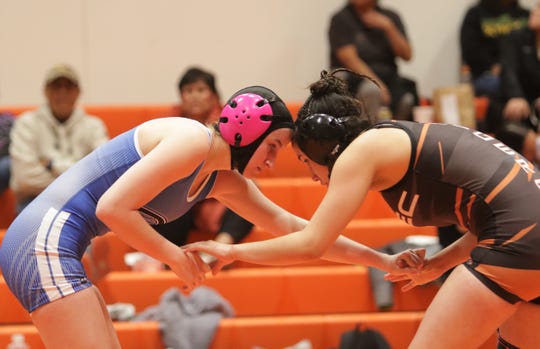