Tigers cruise to victory at tournaments in California, Utah

AZTEC — The Aztec wrestling team is making a big push to be the last squad standing come state tournament time.

The Tigers dominated against various teams and wrestling styles last month, winning both the Desert Storm Invitational in St. George, Utah and the Blackwatch tournament in Upland, Calif.

"Our hard work is really what's kicking everyone's butt. That's one of our biggest factors out there on the mat, our endurance," senior Josiah Griego said. "We just always fight and try to score the last point each period."

At the Blackwatch tournament, which featured 66 teams, Aztec had seven wrestlers place in the top five in their respective weight divisions. Griego (120 pounds, named the tournament's Most Oustanding Wreslter) and junior Cody Candelaria (138 pounds) both won titles in their weight classes.

Coach Monte Maxwell said constant movement on the mat and staying on the attack has played to Aztec's favor.

"We want to be tough on our feet, and we've got to be able to tilt people," Maxwell said, adding his team must also replicate that constant movement on defense more often to help launch more counterattacks.

Despite all the time spent traveling hundreds and hundreds of miles across the western United States, along with preparing for different foes, Aztec is fresh and looks to keep its intensity high.

Aztec wrestlers are now doing their conditioning, which includes completing 12 laps up and down the steps circling the school's gym, equaling 1 mile in total distance, twice a day — all before hitting the actual training room.

"We condition pretty hard in practice so that we can go out there with a high pace throughout the match and just tire people out," Griego said.

The Tigers hope that preserving that higher energy level will help them bring the blue trophy home. Aztec's last state title came in 2002. 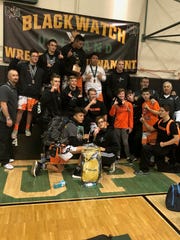 The Aztec wrestling team, seen here after winning the Blackwatch tournament on Dec. 28 in Upland, Calif., returns to the mat for Thursday's dual against Bayfield. (Photo: Photo courtesy of Monte Maxwell)

Assessing his lineup top to bottom, Maxwell said this squad has progressed at a faster rate compared to previous seasons.

Aztec will face Bayfield, Colo., in its next team dual 6 p.m. Thursday at Koogler Middle School in Aztec.