AZTEC — The Aztec wrestling team made a clean sweep of the District 1-5A tournaments this season.

AZTEC — The Aztec wrestling team made a clean sweep of the District 1-5A tournaments this season.

The Tigers won the district dual tournament last weekend, then closed out the regular season on another high note, finishing first at the District 1-5A individual tourney today at Lillywhite Gym.

The Tigers accumulated 177.5 points on the day, besting Farmington's 173-point outing, and had 12 wrestlers earn automatic bids to the 5A state tournament next weekend in Rio Rancho.

"Hopefully, we're peaking at the right time, and we can build off of some of our mistakes today so we can go down to state at full strength," Aztec coach Monte Maxwell said.

Bloomfield finished third with 163 points, Miyamura placed fourth with 128.5 points, Kirtland Central ended up fifth with 107.5 points and Gallup was sixth with 21 points.

Wrestlers needed to finish in the top four of their respective weight class to earn an automatic bid to state.

"They did a great job today. To have eight kids on the front side going into the finals and four more in the consolation finals is a great feeling," Farmington coach Jesus Mendoza said. "From the coaching staff, the athletes, everything is working well for us right now."

The Bobcats had 11 wrestlers qualify and brought four individual titles back to Bloomfield with Levi Whitley (132), Avery Scott (160), Luke Deifenbaugh (195) and Michael DeHerrera (220) winning their bracket.

Bloomfield coach Greg Shoemaker said the Bobcats have made major improvements during the past few weeks, and he credited the entire program, from every wrestler to the members of his coaching staff, for the growth. 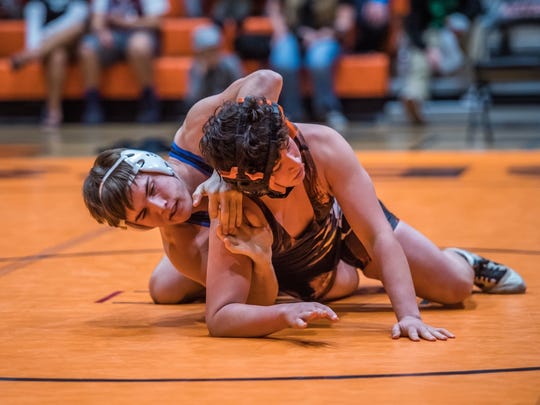 "We just keep improving. I think we're peaking at the right time," Shoemaker said. "The kids wrestled better than they've wrestled all year, and that's what you're looking for. I was real pleased to see the guys come out and do that."

KC's lone individual champion was Cody Manuelito (182), who tore through his two matches with pins in 39 seconds and 1:27.

The Broncos had 10 wrestlers qualify for state, and Sandoval thinks the Broncos' Luke West (120), who placed at the state tourney last year, and Myles Harvey (106) are in good positions to receive wild-card bids. 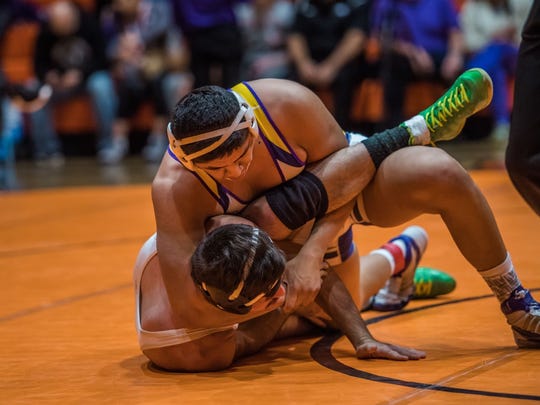 "Luke's a returning state placer, and he didn't even qualify today. It just goes to show how tough this district is," KC coach JJ Sandoval said. "I think (District 1-5A) is the best by far in 5A, and today shows that. When you have a state placer not place in the top four, it's a pretty tough district."

Wild-card bids for the state tournament will be named Monday. Seeding and brackets for weight classes will be revealed Thursday, and the state tourney will be held Friday and Saturday at the Santa Ana Star Center in Rio Rancho.

Piedra Vista got off to a rough start at the District 1-6A individual tournament today in Albuquerque, but the Panthers responded with a strong performance, snagging 10 automatic qualifying spots for next weekend's state tournament.

The Panthers finished the tournament with 146 points, which was good for fourth. But only 8 points separated them from a second-place finish. PV sent 13 of a possible 14 wrestlers to the tourney and were knocked down to 12 when 152-pounder Matt Martinez weighed in 1 pound over the limit.

"I tell the kids 6A is just a label that's put out there. I think they know now that they can wrestle with anybody," PV coach Michael Bejar said. "Missing Matt hurt, there's a possible 8 points right there that he could have scored us. But you have to do what you can with what you have. I think the kids came away with more confidence. We'll use these next three days to polish things up and go do it again."

Cleveland won the tourney with 181 points. Rio Rancho was second with 154 and Volcano Vista finished third with 149. Cibola placed fifth with 87.5 points.

Wrestlers had to finish in the top three to qualify for the state tournament.

Bejar said the Panthers also got strong performances from Victor Alba (132), Haden Cox (195) and Jared Terry (285), who all picked up wins over opponents who beat them earlier in the season.