He goes about his business quietly, but Alberto Marquez's impact on the mat has been resounding for Piedra Vista. 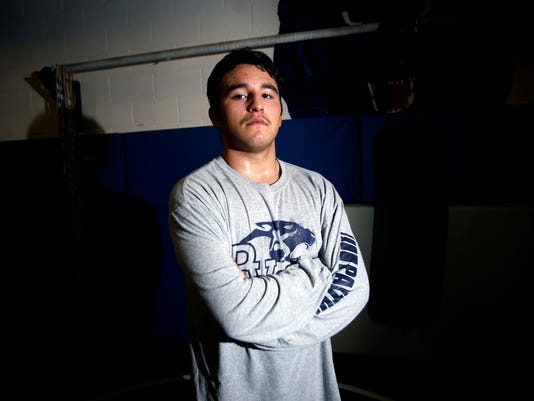 FARMINGTON — He goes about his business quietly, but Alberto Marquez's impact on the mat has been resounding for Piedra Vista's wrestling team this season.

With three third-place tournament finishes and a 25-9 record this year, the 195-pound senior has been a constant for the Panthers. At last weekend's District 1-5A duals in Gallup, he went 4-0, helping PV secure first place at the meet.

"He's kind of become our quiet assassin," PV coach Michael Bejar said. "He scores bonus points for us, and he does it on a consistent basis. He's one of those kids you can always rely on."

Bejar has been coaching Marquez for the better part of six years, dating back to 2010 when Marquez took up the sport as a seventh grader. The coach said Marquez's quiet, kind demeanor had a tendency to spill over onto the mat, which was actually a negative thing.

"Alberto's really the nicest, kindest kid in the whole world," Bejar said. "So it was hard to kind of bring that aggression that you need to be successful in this sport out of him."

It didn't come naturally, but Marquez said he's found a way to channel that aggression in his matches.

"This sport teaches you so much, it teaches you how to control every aspect of your life," he said. "It helps you know when to flip that switch."

This season has been a trying one for Marquez, as he has dealt with a multitude of nagging injuries. He's wrestled through them, though, and has done so successfully.

That display of toughness hasn't gone unnoticed by his coach, who said the injuries have only made Marquez mentally stronger.

"He's been pretty banged up this year, unfortunately, but he hasn't let that deter him," Bejar said. "He's just got such a determined mindset this year, and nothing can really stop him."

Marquez has always been a hard worker, but he took his focus to a new level late last year at state, after being humbled in his first match.

He didn't see it coming, but Marquez lost his opening bout. Instead of letting his performance spiral, the loss reinvigorated him, and he reeled off five straight wins for PV to earn third place in his weight class.

While he tried hard in that loss at state, he admitted he wasn't as focused and prepared as he should have been by the time the match began. He's had a different mindset ever since.

"Losing really opened my eyes — not only for the rest of that day, but up until now," he said. "It's been driving me to never let it happen again, to just work even harder and focus even more."

Marquez has been turning heads everywhere he's wrestled this season. When he took third on Dec. 30 in Winslow, Ariz., he lost in the semifinals to an undefeated state champion out of Tucson, but received praise from the opposition for his effort.

"That kid and his coaches came over to me and said, 'Man, this is one of the toughest kids we've seen,'" Bejar said. "(Alberto) knew how good the kid was, he just wasn't intimidated by him. And they respected that. It doesn't matter who is in front of him, he's going to give 100 percent every time."

The state qualifier meet will be Saturday at Farmington High School. Marquez is coming in hot after his undefeated day at district, and if he can continue to score pin falls and earn bonus points like he's done lately, he has an excellent chance at qualifying.

Bejar said he thinks Marquez will do well on Saturday and that state will be a different story this time around for the wrestler.

"He's taken third the last two years. He hasn't gotten over that proverbial hump," Bejar said. "This year, we think it's his time, and he thinks it's his time, so that's a good mindset going into it."

"I don't have a least favorite."

"Not trying my hardest."

"I play rugby outside of school."

"I just try to get focused, get my mind right."