Aztec defeated Cobre 48-27 in the finals to claim the championship at the Aztec Tiger Duals Saturday.

Aztec's Tyler Robeson pins Patrick Irish of Los Alamos during a match at 285 pounds at the Aztec Tiger Duals on Saturday in Aztec.(Photo: Jesse Hankins/Special to The Daily Times)

FARMINGTON — The Aztec wrestling team finally got to compete in front of its home crowd Saturday, and the Tigers did not disappoint their fans during the Aztec Tiger Duals.

Aztec defeated Cobre 48-27 in the finals to claim the championship, and finished the day unbeaten in its five matches at Lillywhite Gym in Aztec.

“It was a very strong team effort today. There were bright spots all through the lineup. Every one of them wrestled tough and did what they needed to do,” Aztec head coach Monte Maxwell said. “It was really nice to be at home after all of our traveling, and to come away with a win today makes it even better.”

Aztec reached the championship dual after defeating Española Valley, Los Alamos, Shiprock and Monticello, Utah, during the dual matches in Pool A.

The win over Monticello was not decided until the final match of the dual, when 113-pounder Tommy Fletcher scored a 7-1 decision to give the Tigers a 38-36 win.

Despite finishing the day unbeaten, Maxwell said there were plenty of things his team did wrong.

“We made a lot of mistakes today, so we need to work and improve on those,” Maxwell said.

Wrestling out of Pool B, Bloomfield beat Los Alamos 60-16 in the fifth-place match, while Kirtland Central earned seventh by topping Española Valley 63-18.

Pool B featured plenty of parity. Cobre beat Bloomfield on its way to winning the pool, but not before losing to Kirtland Central, which Bloomfield handily defeated.

Bobcats coach Greg Shoemaker said there was no shortage of competition in the pool.

“I thought we wrestled pretty good. As usual, a lot of matches could have gone either way,” Shoemaker said. “But it was a really fun pool to be a part of. Fun to wrestle in, fun to watch.”

Kirtland Central came into Aztec fresh off winning the Spartan Duals in Bernalillo last week, but ran into much tougher competition on Saturday.

“We lost a lot more matches than we did last weekend, but it’s a good eye-opener for our kids,” KC coach JJ Sandoval said. “We wrestled sloppy at times, but then other times, we wrestled super well.” 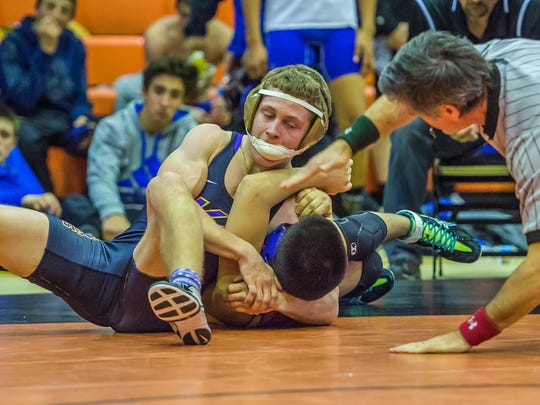 Both Bloomfield and Kirtland Central will compete at the Cardinal Classic in Las Vegas, N.M., next weekend.

In the ninth-place dual, Farmington knocked off Shiprock 51-24.