Lady Panthers getting past growing pains

Lady Panthers getting past growing pains

Piedra Vista's Talyn Miller bumps the ball over the net during Tuesday's nondistrict match against Bayfield. The Panthers have turned things around after a rough start to the season.(Photo: Matt Hollinshead/The Daily Times)Buy Photo

FARMINGTON — The Piedra Vista volleyball team had to deal with some growing pains early this season, but the Lady Panthers are showing signs that they're putting those limitations behind them.

PV is in a rebuilding stage this season. Its younger and less-experienced players had to fill vacancies at the net, but they adjusted to the speed of play fairly quickly.

“They’re getting a lot more confident in themselves, being able to perform in front of a crowd,” junior setter Sam Harris said. “They just needed to commit to that change.”

Now that group is making strides against tougher competition, and PV is getting closer to being at full strength.

Freshman middle hitter Bailey Rasmussen is back in the lineup after missing six matches last month with a concussion. Junior middle hitter Courtney Moore is a bit behind schedule recovering from two slightly torn patellas in her knees, but is expected to make her 2017 debut on Friday.

"We had to pull up some JV players, and that went OK. With Courtney and Bailey out, we all had to step up," freshman outside hitter Kacee Moore said. "There were some times where we were really struggling in some games. But we kind of got the hang of it and came back."

That’s what makes the team's latest surge even more encouraging, and now the Lady Panthers are eyeing a late-season run.

"That's what I'm banking on," coach Ron Becker said. "I feel like we're having good rhythm and timing. Everybody's working hard, and they're working well together." 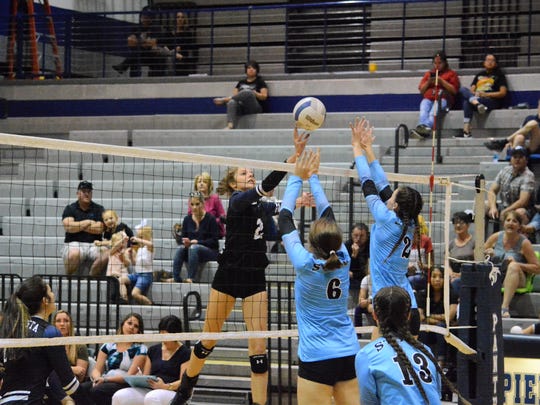 Piedra Vista's Kacee Moore tips the ball over the net against Cleveland's Aubrey Losey (6) and Kenley Vote (2) during the second set of Saturday's District 1-6A match in Farmington. (Photo: Matt Hollinshead/The Daily Times)

PV (8-7, 1-2) is again playing at an up-tempo pace now that the newer players have had extra time to acclimate.

“They’re starting to get used to it now,” Harris said.

The Lady Panthers also are getting to the ball faster on defense and keeping it off the floor more often, and players are also reading opposing hitters’ movements faster.

After defeating Cibola in the District 1-6A opener more than a week ago, PV is convinced it has regained its competitive edge against the state’s toughest foes. And the Lady Panthers, winners of six of their last nine matches, are excited that the newer group, which includes Rasmussen and junior hitter Alex Logan, has emerged.