The Lady Broncos played together in defeating Gallup in straight sets at Kirtland Central High School.

KIRTLAND — A rocky regular season ended on a positive note tonight for the Kirtland Central volleyball team, which won its season finale 3-0 against Gallup at home.

Tonight was senior night in Kirtland, but it may have been more apt to just call it Jordan Begay night, as Begay was KC's only senior this season. The youthful roster made 2016 a challenging year for coach Nadia Watson, but she said Begay was there every step of the way to help lighten her load.

"She's our captain, and she's like the head of our team's body," Watson said. "She brings us back down to earth if we get too excited, and she's just a smart girl. She knows what to do with the ball at crucial times."

Watson said her girls felt confident all afternoon prior to the match.

“It was just about coming out feeling prepared to win. I keep telling my girls that they each individually have to do their job and do it well, and that's how we pull out wins. And everybody did well, it wasn't just one person.”

"It was just about coming out feeling prepared to win," Watson said. "I keep telling my girls that they each individually have to do their job and do it well, and that's how we pull out wins. And everybody did well. It wasn't just one person."

The only time Gallup made KC feel pressure was late in the third set, when the Lady Bengals tied it at 18 and stuck within a point or two of the Lady Broncos for a few volleys after that.

It was a true team effort that put Gallup away for good. At 20-19, KC outscored the visitors 5-2 to lock up the sweep, and the last three points came from three different contributors. Frankie Burns blocked a ball at the net, and Gabrianna White-David and Dominique McGilbert registered an emphatic kill apiece. 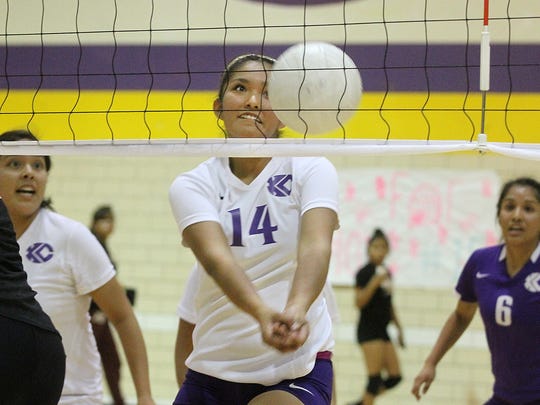 Watson said she's got a great group of selfless players who are all capable of making plays.

"That's the great thing about these girls is they just work hard, and there's not one that stands out," Watson said. "We can distribute the ball to anybody and be confident they'll do well with it."

KC finished third in the District 1-5A standings behind Aztec (first) and Farmington. The Lady Broncos try their hand at sneaking into the state tournament next week by competing in the district tourney, which starts Tuesday.

By easily knocking off Wingate 3-0 tonight, Lady Eagles punched their ticket to play in a one-game playoff versus Shiprock to decide the regular-season winner of District 1-4A and an automatic bid into the state tournament.

"The girls were more focused and more determined than they have been," Crisp said. "Sometimes, it does take a loss to refocus and come back together and remember that (a district title) is not in the bag yet."

Kariah Wilson had five aces in the victory over Wingate (3-16, 2-4), while Taina Sandoval notched 14 assists and Martinique Larvingo had 14 kills. Prep's Kaylee Wood did her part with 20 digs.

The Lady Eagles will be right back in Wingate on Saturday to play Shiprock at 5 p.m. Crisp said her team suffered its worst mental breakdown of the season against the Lady Chieftains in that 3-2 loss on Oct. 18, but she doesn't expect it to happen again.

"We've bounced back from mental lapses before, but we didn't that night, and I think the girls really learned from it," Crisp said. "Shiprock is a team that, once they get momentum, it's really hard to take it back, so we have to come out strong."

The Lady Chieftains (14-5, 5-1) swept Thoreau (8-11, 0-6) for the second time this month to set up the third match this season with Prep. Shiprock is 1-1 against the Lady Eagles heading into Saturday's showdown.