The Farmington volleyball team gained sole control of second place in District 1-5A tonight with a win. 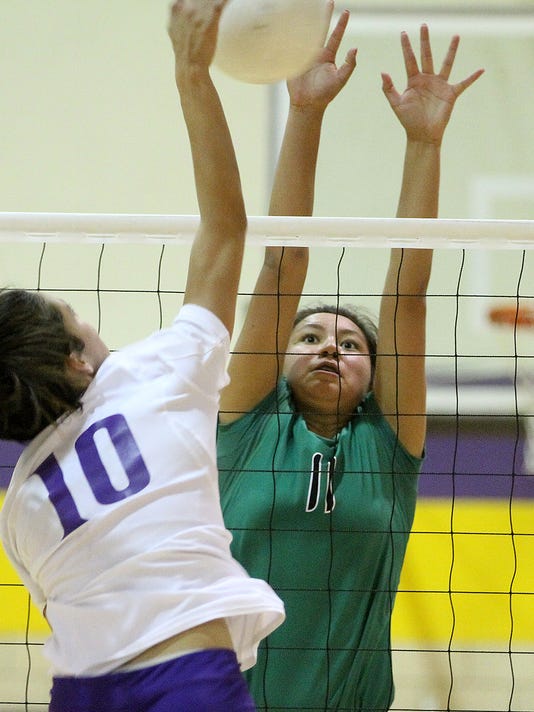 FARMINGTON — The Farmington volleyball team gained sole control of second place in District 1-5A tonight with a 25-21, 25-14 and 25-17 win over Kirtland Central tonight at in Kirtland.

KC coach Nadia Watson said Farmington was in control most of the match, thanks to the Lady Broncos lobbing over easy balls for the Lady Scorps to set up kills.

“The difference in the first set and the second and the third was we gave Farmington way too many free balls,” Watson said. “(Farmington) did a good job of distributing the ball and putting it away. We just gave them too many easy balls, and they took advantage of them.”

Farmington didn’t make it easy on KC with great serves that kept the Lady Broncos out of their system throughout the night.

Sophomore JJ Curry led the Lady Scorps at the service line, putting all 17 of her serves in play.

“We actually talked today about her serving,” Farmington coach Alana Rowland said of Curry. “A couple of weeks ago, we had individual meetings, and one of her goals was to finish the season with 15 aces. I think she was at 14 coming into the game, and I texted JJ today and told her to stay positive and confident at the service line, and she did a really good job of that tonight.”

KC got a boost from Dominique McGilbert, a junior who had spent most of the season on the sideline recovering from a shoulder injury. After taking the last couple of matches to get into a rhythm, Watson said McGilbert found comfort on the court with a good all-around performance.

KC will travel to Gallup to take on Miyamura (6-10, 1-5) on Thursday and may have to win its final three matches to earn an at-large bid to the 5A state tournament.

“I don’t want them to lose hope. I think that’s the biggest thing for our girls,” Watson said. “Sometimes, teams count themselves out after they lose, but anything can happen in the post season. If they come together and put the ball away like I know they can, and like the rest of the community knows they can because they’ve had some really good moments, if they can put it all together, they’re really hard to stop.”

The Aztec volleyball team has been nothing short of dominant in district play, and the Lady Tigers continued their roll through the competition with a 25-12, 25-20 and 25-22 sweep of Bloomfield tonight at Lillywhite Gym in Aztec.

The Shiprock volleyball team rallied from a 2-0 deficit to hand Navajo Prep its first loss in District 1-4A tonight at the Chieftain Pit in Shiprock.

“For the first two games, we had the momentum,” Prep coach Rainy Crisp said. “The girls came out really strong and played very well in the first two sets. The third was close, but the biggest part of the set was we had mistakes on our serve receive. That’s how Shiprock got a lot of their points.”

The win in the third set sparked the Lady Chieftains (12-5, 3-1) and the crowd, which Crisp said played a factor late in the match.

“We kept it close, but it was hard for us to get back up,” Crisp said. “In previous games, we were able to pick ourselves back up after a third-set loss, but maybe playing at the (Chieftain) Pit and playing against the strong fan base they have made it tough.”