The Navajo Prep volleyball team picked up a key win in its District 1-4A opener tonight, edging Shiprock. 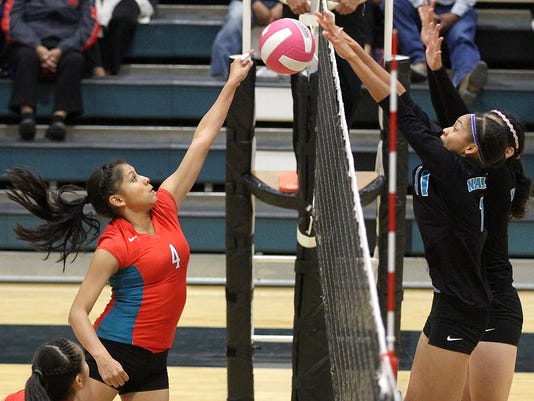 “This was a great first game for us. We knew this one was going to be tough,” Prep coach Rainy Crisp said. “We really wanted to come out strong and make a statement tonight. We wanted to prove, especially to ourselves, that we can come out and compete in 4A, and that’s what we did tonight.”

The two teams went back and forth through the first set. Prep took an early lead, but every time the Lady Eagles built their advantage to four or five points, Shiprock would rally and cut the deficit to one or two.

Shiprock finally took the lead at 19-18, the Lady Chieftains’ first advantage since it was 2-1, but could never put more than one point between themselves and the Lady Eagles. The two traded points until it was 22-22, when Prep took control to get the win.

“Communication is what killed us,” Shiprock coach Teri Atcitty said. “We need to work as a team and talk when we’re out there.”

The third set followed the format of the first two as the Lady Eagles and Chieftains traded short runs. Prep held the lead for the early stages of the set. Shiprock took its first lead at 17-16 and never relinquished it the rest of the set. 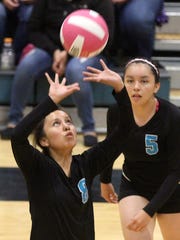 The fourth set was no different than the first three. Multiple lead changes occurred through the first half of the set with Shiprock taking a 15-13 lead. But like the second set, the Lady Eagles never relented, going on a 7-1 run to take control with a 20-16 lead before closing out the set and the match.

Prep’s serving was a key factor in the Lady Eagles’ success.

“We’re a lot more consistent. We were hurting ourselves a lot early in the season with our serves, and that’s been something we’ve been working on. We’re not just serving, but trying to serve tough,” Crisp said.

Atcitty said the biggest thing the Lady Chieftains need to work on going into the match is communication.

Crisp said she wants to see her team fine tune its weaknesses.