Navajo Prep couldn’t get anything going against Eunice on Friday evening and fell to the Lady Cardinals in Rio Rancho.

FARMINGTON — Navajo Prep couldn’t get anything going against Eunice on Friday evening and fell to the Lady Cardinals 25-17, 25-23, 25-16 at the Santa Ana Star Center in Rio Rancho.

The loss in the semifinals eliminated the Lady Eagles from the 3A state tournament.

“It was definitely one of those games where nothing would go right for us. I think we just couldn’t get any momentum going,” Prep head coach Rainy Crisp said. “Eunice came out very strong in the first game and kept the momentum. It was hard to come back from that first loss.”

Crisp said the Lady Eagles put together some rallies, but were never able to take charge in the sets.

Navajo Prep's LeShauntai Adams spikes the ball during a quarterfinal match against Santa Fe Prep in the 3A state tournament at the Santa Ana Star Center in Rio Rancho. (Photo: Jesse Hankins/Special to The Daily Times)

While Prep came up short of its goal of playing for a state title, Crisp said that as long as the Lady Eagles learn from the experience, it can’t be considered a loss.

Crisp also said a key component of the team's success this season stemmed from the way the seniors took on leadership roles and brought everyone together. 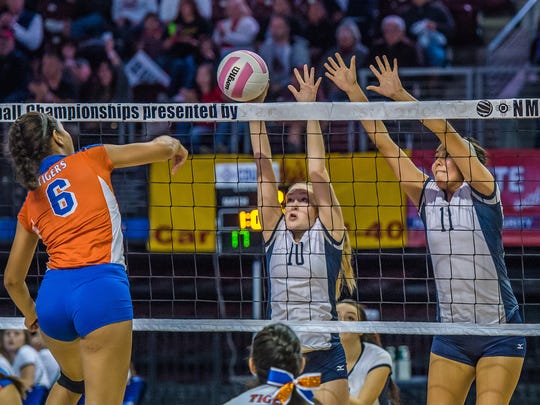 Piedra Vista's Kamryn Gordon (10) and Autumn Begay (11) block a spike from Los Lunas' Jordan Holland during the quarterfinals of the 5A volleyball tournament Friday at the Santa Ana Star Center in Rio Rancho. (Photo: Jesse Hankins/Special to The Daily Times.)

Piedra Vista’s season came to a close today during the quarterfinals of the 5A state volleyball tournament in Rio Rancho.

“We started slow in the first set, but in the second, they turned it around immediately and hammered them. I’m really proud of the way they came back,” PV head coach Ron Becker said. “The third and fourth sets were a dog fight all the way through. We were up in the fourth set, and I thought we were going to push it to a fifth, but it didn’t go our way.”

Becker also said he was impressed with the improvement the team made as a whole from the start of the season. 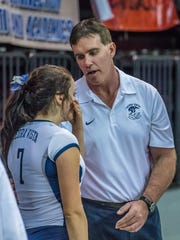 “I’m really super proud of them. From the start of the year until now, I wish you could’ve seen them play down here because they were amazing,” Becker said. “One thing I was super proud of was they fought form the start until the very end. They played hard every point. I’m very impressed with the level we were playing at.”