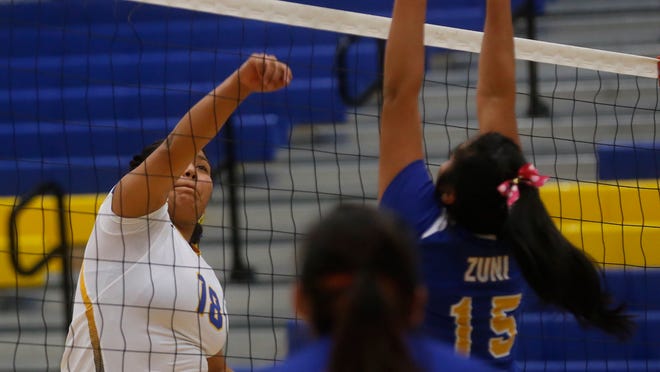 BLOOMFIELD – The Bloomfield volleyball team kept its season alive with a 25-21, 25-18, 25-23 sweep of Zuni during the first round of the District 1-4A tournament Tuesday night at Bobcat Gym.

While the first set was close most of the way through, Bloomfield head coach Rae Collins said she never felt like the Lady Bobcats were in jeopardy of losing it.

“(Zuni) started off very strong, and we had some jitters,” Collins said of the first set. “It was close, but it never felt like it was that close.”

But the Lady Bobcats' jitters resurfaced late in the set, allowing Zuni to score seven straight points and cut the deficit to 20-18 before Shaylee Charley stepped to the service line to help Bloomfield wrap up the win.

After falling behind 5-2 to start the third set, Chasitty Newton picked up at the service line where Charley finished the second set, guiding the Lady Bobcats to an 8-0 run to open a 10-5 advantage.

Zuni rallied to tie the third set at 17 and forced Bloomfield to call a timeout.

Following the break in action, Bloomfield regained the lead with a 3-0 run to make it 20-17, then traded points with the Lady Thunderbirds the rest of the way to earn the win.

Wingate got the better of Bloomfield in the teams’ two matches this year, winning both by margins of 3-1, but in both meetings, the Lady Bobcats stuck with the Lady Bears.

“We’ve played really well against them. Granted, we lost, but we were able to play with them,” Collins said. “That’s one of the things the girls have in their pocket — knowing that they’re capable of playing with them.”

Shiprock (14-7) rolled past Thoreau (2-18) in the first round of the District 1-4A tournament, taking care of the Lady Hawks in three sets Tuesday night at the Chieftain Pit in Shiprock.

“It went pretty well,” Atcitty said. “Basically, the girls worked as a team, and we tried to get everyone playing time.”

While coasting to the win, Atcitty said the whole team played well, and sophomore Chamika Begaye came through with some good kills.

The win moves the Lady Chieftains into the tournament’s semifinals, where they’ll face Kirtland Central (13-6) in Kirtland on Thursday.

Atcitty said one of the biggest keys to the match will be if her squad is mentally ready to go.

“We started really slow but finished strong. We just couldn’t get In a rhythm,” Aztec head coach Anna Strauss said. “The girls made valiant effort. They came back strong and played well. The scores might not tell it, but they played well.”

Strauss credited Myra McCaskill and Vanessa Chavez for their effort.

The loss ends Aztec’s season, but with only three seniors on the roster, Strauss is confident the team will be on the rise next season.

“We built some momentum going into next year,” Strauss said. “It’s bittersweet for our seniors, but they really helped us, and we learned a lot of lessons for next year.”