On Thursday night at Bronco Arena, one team came to play, and one team didn’t.

Kirtland Central's Krystal Sheka pushes the ball toward Bloomfield's side of the net on Thursday at Bronco Arena in Kirtland. Jon Austria/The Daily Times
Fullscreen 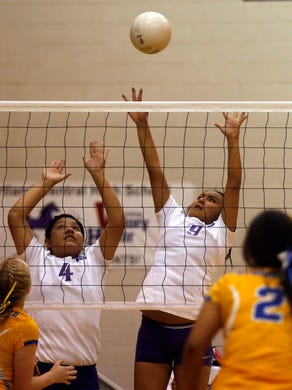 Bloomfield's Danyelle Horton sets the ball for her teammates on Thursday during its game against Kirtland Central at Bronco Arena in Kirtland. Jon Austria/The Daily Times
Fullscreen 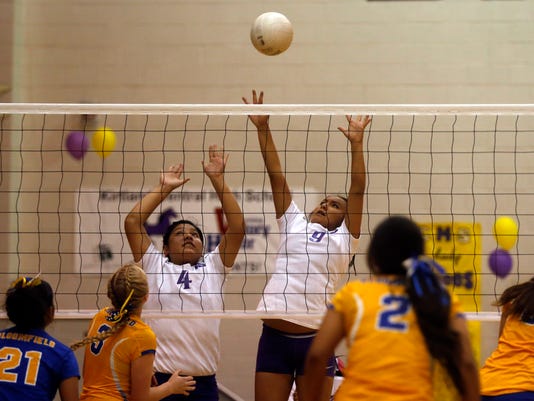 KIRTLAND — On Thursday night at Bronco Arena, one team came to play and one team didn’t.

The Lady Broncos (13-5, 8-2 District 1-4A) will now play Wingate (17-3, 8-2) in a one-game playoff to determine the top seed of the 1-4A district tournament, since there cannot be a tie between the top two teams in the district, per New Mexico Activities Association rules.

The one-game playoff will be played at a neutral location and hasn't been scheduled. The winner will receive an automatic state tournament bid.

As healthy as they’ve been all season, coach Nadia Watson believes the Lady Broncos are peaking at the right time. She referred to Thursday’s win as a “statement game.”

“We basically wanted to come out and send a message,” Watson said. “(Bloomfield) came here and wanted to win, but I think we wanted it a little bit more.”

Kirtland never trailed Bloomfield (9-9, 5-5) at any point in the match.

The Lady Broncos used a trio of fast starts to distance themselves from the visitors – KC got off to a 5-0 start in the first set, a 16-1 start in the second and an 8-3 start in the third. 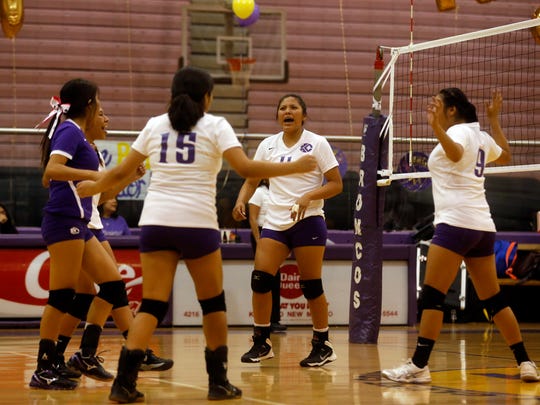 Senior outside hitter Krystal Sheka was a force for KC at the net, coming up with multiple kills and blocks in all three sets.

Sheka was one of the Kirtland girls who missed a crucial stretch of games in early October – including a 3-1 loss to Shiprock on Oct. 8 – so Watson said it’s been great to have her back altering matches.

“To have her back is really nice because she finishes the ball really well,” Watson said of Sheka.

Bloomfield couldn’t get out of its own way for much of the night.

“A lot of it tonight was just simple volleyball mistakes like not moving our feet and not making the correct passes,” Brown said. “It’s on the players if everything is going to come together. We as coaches can want results all we want, but it’s up to the players to make it happen.”

The regular season is over for the Lady Bobcats, but their coaching staff hopes they can come together as a team next week and make a run in the district tournament.

“We have a chance at the bigger picture, and for us, that’s state,” Brown said. “We’re remaining positive, and we know this team can play much, much better than it did tonight.”

Bloomfield finished fourth in 1-4A out of six teams, so with the way the ladder-style district tourney is set up, the Lady Bobcats would have to win four times next week to qualify for state.

Kirtland will be tasked with beating an excellent Wingate team for a third time this year if it is to earn the No. 1 district seed and state bid. Watson said the one-game playoff is going to be quite a challenge.

“It’s going to be really tough because, in my mind, we have to beat (Wingate) four times this year,” Watson said, when including next week’s district tourney. “It puts us and them at a disadvantage already because we automatically have to play at least one extra game next week. We weren't going to practice (today), but I think that's going to change now."

The Lady Chieftains had a shot at earning first place in the district on Thursday night, but just didn't bring it in a road match with Wingate and were swept 3-0.

Coach Teri Atcitty was not available for comment following the loss.