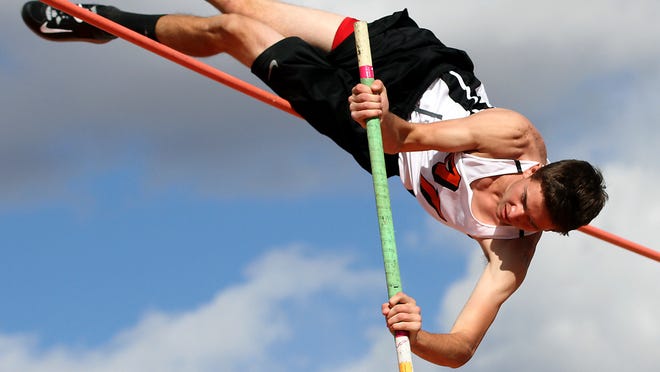 FARMINGTON – The Piedra Vista boys and girls track teams had another strong outing with both teams placing second at the Top Gun Relays Friday at Fred Cook Memorial Stadium in Aztec.

PV finished with 95.5 points, and Aztec was third with 76 points.

Aztec head coach Steve Lanier said he was pleased with the performance of his young team.

“I think we did really well. We’re really young, but some of our freshman and sophomores stepped up and surprised us,” Lanier said.

Lanier said freshmen Tommy Fletcher and Carson Collins were among the surprises who looked good in their respective events. Lanier said the team is still trying to figure what events are best for some individuals after bad weather during the past week cut into their practice time.

Farmington placed fourth with 68 points, followed by Bloomfield with 39.5 points.

“I’m pretty pleased with where we are. We still have a lot of work to do, but we’re kind of finding our groove,” Aztec girls head coach Anna Strauss said. “We have quite a few young kids who are stepping up and had a few (personal records) (Friday).”

Farmington finished fourth with 41 points, and Bloomfield, and the Academy for Technology and the Classics tied for sixth with 21 points. Navajo Prep placed seventh with 12 points.

At the Shiprock Quad meet on Friday, the Kirtland Central boys ran away with the title, scoring 219.5 points.

“We had a good day. I wanted to get a lot of reps in with the kids and get some field event work in,” KC boys head coach Heath Guillory said. “We wanted to get some improvements, and I think we accomplished that. Overall, we had a lot of kids placing in the field events, and I was pleased with the way my sprinters improved in the 100, 200 and 400.”

Guillory said freshman phenom Kashon Harrison was impressive in the 1,600, setting a new season-best in the event by a few seconds with a time of 4:32.46, more than 17 seconds ahead of the second-place finisher.

Shiprock placed second with 91.5 points. Crownpoint rounded out the top three with 38 points.

On the girls side, Shiprock edged Kirtland Central 138.5 to 133.5. Crownpoint placed third with 64.5 points

“It was a total team effort. I have quite a few girls out this year, and we had a good effort from all the different areas,” Shiprock head coach Alice Kinlichee said. “We had points everywhere. We had depth in the distance races and in the field events. We had nice contributions from every area. It was a nice surprise to win our home meet.”

Sophomore Kylie McKinley had a standout performance for the Lady Chieftains, scoring 21 points across her various events. McKinley won the triple jump, placed second in the 100- and 300-meter hurdles, and third in the high jump. She was also a part of Shiprock’s 4x200 relay team that placed second.