Aztec squashed talk of a softball curse with a 7-2 win in the 5A championship game.

The Aztec softball team poses for a photo after winning the 5A state title on Saturday in Albuquerque.(Photo: Karl Schneider/The Daily Times)Buy Photo

ALBUQUERQUE — The Aztec softball team has suffered more heartbreak in the state championship game than any group ever should.

Runner-up finishes in four of the last five seasons, including a 1-0 loss last season, had people whispering about an Aztec curse. But all the talk and any lingering feelings of heartbreak were extinguished today when the Lady Tigers prevailed over Artesia with a 7-2 victory in the state title game at the UNM softball field.

"Even though we've been so close, this makes up for all the years of work," Aztec senior catcher Kylie Brown said. "This year, we really pushed ourselves so it wouldn't be close and make sure we'd get the win this year." 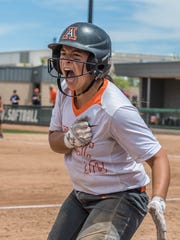 Aztec's Kylie Brown celebrates after scoring a run against Artesia in the 5A softball championship on Saturday in Albuquerque. (Photo: Jesse Hankins/Special to The Daily Times)

Aztec's five seniors — Brown, Paige Adair, CheyAnne Simkins, Sarrah Jones and Ashlynn Bradley — have been the lifeblood of the program for years, and head coach Roy Johnson credited the seniors with pushing the program to its current level.

"The whole experience is special because they've been fighting for five years to get this trophy," Johnson said. "To have to wait until they're seniors is probably the coach's fault, but they never gave up on me, and I never gave up on them."

The victory never seemed to be in doubt, and if they were nervous, the Lady Tigers didn't show it — except for maybe some nervous energy when they were one out away from the win.

"One away, that's the hardest out of the game," Brown said. "I just knew that (Adair) was going to throw a great pitch. She threw great all game."

With two outs in the top of the seventh, Adair, Aztec's No. 1 pitcher for the past three seasons, got the final batter to hit a grounder back to the circle. She fielded it cleanly and all that was left was the throw to Jones at first base.

"As soon as (Adair) caught it, I was like, 'This is it. All I have to do is catch it,'" Jones said. "We're finally state champs and broke the 12-year curse. It was honestly the greatest feeling I've ever had in my life. I don't even have words for it." 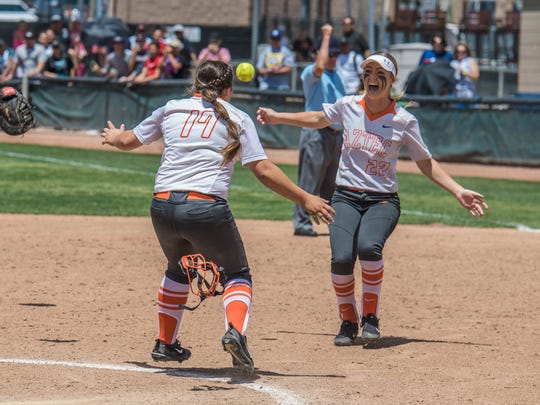 Aztec's Sarrah Jones. right, and Paige Adair celebrate after recording the final out of the 5A state softball championship against Artesia on Saturday in Albuquerque. (Photo: Jesse Hankins/Special to The Daily Times)

If there was ever tension in the Aztec dugout during the game, it was erased in the bottom of the first when the Lady Tigers caught a break.

On a Kylie Brown double to left, Paige Adair was waved around third and sent home. Artesia's throw to home was in time and on line, and it appeared Adair had been tagged out at the plate. But as the home plate umpire moved up the third-base line, the umpire at first didn't rotate down to home, leaving the play at the plate uncovered and no one in position to make a call.

After a brief huddle, the umpires ruled Adair safe.

Brown came around to score on the next at-bat after a Jocelyn Ulrich single, giving the Lady Tigers a 2-0 lead. 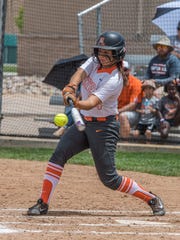 Aztec's Jocelyn Ulrich hits an RBI single against Artesia on Saturday in Albuquerque. (Photo: Jesse Hankins/Special to The Daily Times)

Aztec doubled its lead in the fourth when Bradley hit a bases-loaded single to drive in two runs.

The Lady Tigers added two more runs in the sixth when Adair hit a two-out rocket at the Artesia shortstop, who couldn't cleanly field the ball.

Autumn Petersen provided the final run of the game with an RBI single in the fifth.

Artesia's two runs came from the bat of Kali Crandall, who hit solo home runs in the fourth and sixth innings.