Kirtland Central’s Ayana McGilbert signed a letter of intent to play softball at Bacon College this morning at KC. 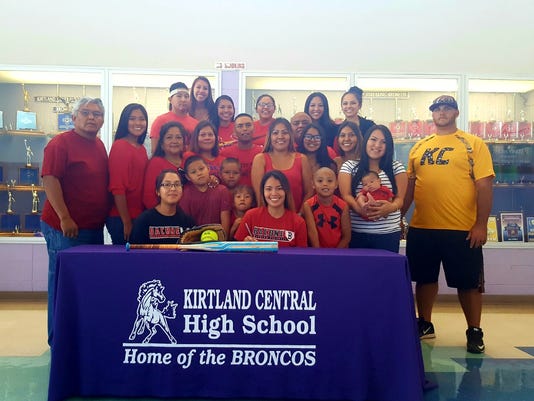 KIRTLAND — Kirtland Central’s Ayana McGilbert signed a letter of intent to play softball at Bacon College this morning at KC.

McGilbert said the decision to ink with Bacone was primarily for the chance to get started on a degree in exercise science with the chance to continue playing softball as a bonus.

“I wanted to go there because of the (academic) programs that they have,” McGilbert said. “They have exercise science, which is what I’m going to go into. I want to be a personal trainer.”

Bacone, located in Muskogee, Okla., competes in the Red River Athletic Conference of the National Association of Intercollegiate Athletics. Last season, Bacone finished fifth in the conference with a 17-30 overall record and a conference record of 12-16.

McGilbert hasn’t made a trip to the Bacone campus to meet the coaches and team yet, but said she has had a lot of talks with head coach Devin Cross and is excited about Cross's plans for the program.

KC head coach Cody Gilmore said that McGilbert will need to get stronger in order to handle the higher level of competition, but he expects the former Lady Bronco to be up to the challenge.

“She has high expectations for herself, so hopefully she’ll continue with that and push herself in this opportunity of going to the next level, which not everybody gets. Hopefully, she can take advantage of it,” Gilmore said.

McGilbert said she’s not sure what position Cross will have her play when she joins the team in Muskogee, but Gilmore said he envisions McGilbert playing in the outfield, where she’ll be able to utilize her speed.

“I could maybe see her as a second baseman, but I think being an outfielder would be her best position so she could use her speed as a greater strength,” Gilmore said.

Bacone has heavily recruited San Juan County softball players this year, as McGilbert becomes the fifth area player to sign with the program. Bloomfield’s Daysha Smith and Kristen Espinosa, and 2015 graduates Chelsea Largo from Bloomfield and Fiona Delegarito from Piedra Vista will all join McGilbert on campus in the fall.

McGilbert said the signings of Delegarito and Largo will help her in the adjustment to being so far from home after the trio spent time playing together and against each other while growing up.

“We’ve played together on different teams and got to know each other really well,” she said. “It will be a fun to play with them.”