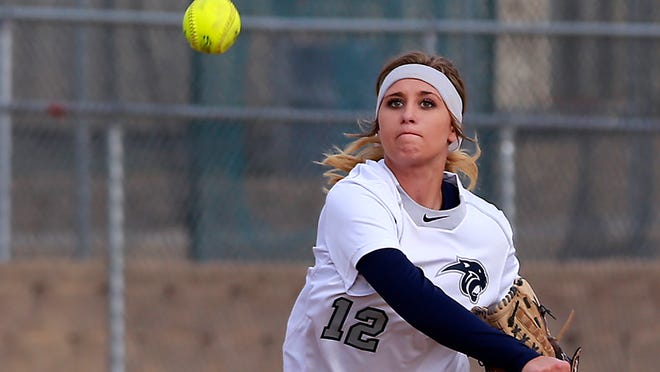 FARMINGTON – After blanking the Piedra Vista softball team 11-0 on April 8 in a scheduled doubleheader, thunder and lightning forced Aztec to wait nearly a week to complete a sweep of the Lady Panthers.

The Lady Tigers (17-5, 4-0 District 1-5A) overcame a 3-2 deficit on Thursday by scoring nine unanswered runs. That propelled them to an 11-7 win at the Farmington Sports Complex in a game that picked up in the bottom of the first inning after being suspended for six days.

All 11 of Aztec's runs came with two outs.

Jocelyn Ulrich cranked a three-run homer in the sixth inning, where Aztec picked up five runs to break the game open. Piedra Vista (12-7, 0-2) fought back and got to Aztec pitcher Paige Adair for five combined runs over the final two frames, but the rally wasn't enough.

"When you score seven runs and play a clean game on defense, you've got to find a way to win," PV coach Kevin Werth said. "Obviously, we couldn't do that, even though I thought we got to Paige a little bit."

"You see somebody six or seven times, and you're a good hitting team like PV is, you're going to square up on them every once in a while," Johnson said. "I thought it was good to face a little adversity and hold off a competitive squad."

Nykki Benally and Aleja Armenta each swatted homers for PV in the loss.

The Lady Panthers host Gallup (7-12, 2-2) today in a doubleheader, while Aztec waits to visit Gallup for a doubleheader on Thursday.

The Lady Bobcats got a scare from Shiprock in the first half of Thursday's doubleheader before digging out of a 5-0 hole and earning a pair of victories.

Behind a Thalia O'Neil grand slam in the sixth inning, Bloomfield (14-6, 4-0 District 1-4A) came back to beat Shiprock 10-5 in the first game, and then steamrolled the visitors 16-0 in the finale at the Bloomfield Softball Complex.

"We weren't disciplined for a while there. Just kept popping the ball up," Clark said of her team's opening-game struggles. "Then we got things going with four in the bottom of the fifth and went from there."

Brandi Alcantar led the Bloomfield charge in the second game by going 3 for 3 with a solo home run. Bella DeHerrera went 3 for 4.

On Saturday, the Lady Bobcats welcome Zuni into Bloomfield for a doubleheader, while Shiprock (8-10, 2-2) plays host to Zuni on Tuesday in another doubleheader.

Lady Chieftains coach Levi Toledo could not be reached for comment.

Host Thoreau was no match for Kirtland Central (13-7, 4-0 District 1-4A) on Thursday when the teams met for an afternoon doubleheader.

Nikki Begay drove three runners home in the first game, and Madison Love knocked in four in the second, as visiting KC dismantled the Lady Hawks (3-12, 0-4) by scores of 12-0 and 20-0.

In the opener, KC scored twice in the first inning and once in the second before finally breaking out with nine in the top of the fifth. Lady Broncos coach Cody Gilmore said his girls started cold.

It was a different story for the Lady Broncos in the second game, as they put up six runs in the first, eight in the second and six in the third. KC had 18 hits in game two.

Kirtland Central plays Wingate (7-9, 0-2) next for a road doubleheader on Tuesday.