Aztec opened play in District 1-5A with a pair of wins, beating Miyamura 1-0 and 8-0 Friday.

AZTEC – The Aztec softball team opened play in District 1-5A with a pair of wins over one of the other top teams in the state, beating Miyamura 1-0 in eight innings, then 8-0 in game two of the doubleheader at the Aztec Tiger Sports Complex Friday afternoon.

“Any W is important to us. That’s the most important thing because, in district, you have to do well to be able to compete down at state,” Aztec head coach Roy Johnson said. “This is the toughest district (in the state), and right now in our district, anyone can beat anyone.”

Aztec pitcher Paige Adair shut the Lady Patriots down in both games. On the day, Adair pitched 15 innings, giving up four hits in each game and striking out a total of 30 batters.

"She's just a competitor," Johnson said of Adair. "She has all the pitches and is very confident in herself, and she believes that her teammates will come through (offensively), so she's going to go out there and keep shutting them out. That's her goal, 'I'll shut them out, and you guys go score.' You can't ask for anything more than what she does."

A pitchers’ duel took place in the first game, but in the bottom of the eighth, Jocelyn Ulrich hit a two-out, walk-off double to left-center to score Trinity Pullock from second base. The hit was just the Lady Tigers’ fourth of the game.

After struggling to get going at the plate in the first game, Aztec jumped on Miyamura in the first inning of the second game.

CheyAnne Simkins notched a lead-off single, then scored on a triple down the third-base line by Sarah Jones. Ulrich later hit a sacrifice fly to left field to score Jones from third and give the Lady Tigers a 2-0 lead.

“We didn’t make the adjustment (to Ashley) in the first game, but we did in the second game. We were hitting the ball better and making things happen,” Johnson said. 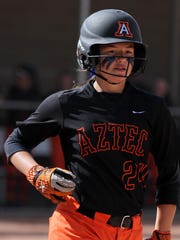 Jones got Aztec going in the third with a leadoff triple and came in for a run on an RBI double from Adair.

Aztec added three more runs in the fifth, getting triple from Simkins and Ulrich during the inning.

Simkins put the exclamation point on the game in the sixth with a two-run home run over the left-field wall to make it 8-0.

Aztec will be off until Friday when it travels to Farmington to face Piedra Vista (12-5).

Piedra Vista wrapped up its nondistrict schedule with two solid performances Friday afternoon in Albuquerque, splitting a pair of games against Valley (9-6) and Volcano Vista (14-2).

The Lady Panthers (12-5) started the day with a 3-0 loss to Volcano Vista, then bounced back to vanquish Valley 7-2.

“It was a good way to finish up our predistrict schedule. We played pretty good today despite the split,” PV head coach Kevin Werth.

Werth said the momentum of the game with the Lady Hawks shifted in the top of the fifth inning when Lady Panthers base runner Katie Jensen was called out on a close play at the plate. Volcano Vista carried the momentum into the bottom of the inning and scored two runs to take a 2-0 lead.

Werth said Aleja Armenta pitched well for the Lady Panthers and kept the Lady Hawks off balance, but PV couldn’t string enough hits together to produce any runs.

Against Valley, the Lady Panthers had more success at the plate.

“We were patient, probably a little too patient, but we came up with some good at-bats and pushed some runs across when we needed to,” Werth said. “And we played pretty good defense. Ananda (Delegarito) pitched well enough to win, and we just played catch behind her.”

Farmington struggled to make plays on defense when it needed them most, and the result was a pair of losses to Gallup (6-4, 2-0) in the Lady Scorpions' district opener.

“She did great and gave us a chance, but we committed six errors behind her,” he said. “She punched out seven and is looking strong as an eighth-grader.”

Trotter said the team was forced to plug in some inexperienced players to fill gaps in the roster, which led to some of the errors.

In the first game Kenna Colebrook went 2 for 4 with an RBI.

Farmington will play a nondistrict game at Bloomfield (7-4) on Friday.