After dominating on Friday, Aztec split its two games Saturday at the Linda Crabtree Softball Challenge.

Aztec's Alaina Sayler field a ball during a game against Cleveland on at Farmington Sports Complex in Farmington.(Photo: Steve Lewis/Daily Times)Buy Photo

FARMINGTON – After dominating on Friday, Aztec split its two games Saturday at the Linda Crabtree Softball Challenge at the Farmington Sports Complex, beating defending 4A champion Silver 11-0, then falling to Cleveland 3-0.

Aztec head coach Roy Johnson said he thought the Lady Tigers played very well during the two-day tournament, in which his team went 3-1 and finished second behind Cleveland.

In the game against Cleveland, pitcher CheyAnne Simkins gave up just three hits, but the Lady Tiger defense committed a few errors that kept innings going and allowed the Lady Storm score.

“We made a few mental mistakes in the game against Cleveland,” Johnson said. “Cleveland played great defense and kept us off balance with their pitcher. We hit the ball really hard — it was just right at them.”

Paige Adair was in the circle against Silver.

Johnson said the Lady Tigers spread things around on offense with everyone contributing at the plate.

After an up-and-down day at the Linda Crabtree Softball Challenge Friday, when Piedra Vista went 1-1, the Lady Panthers rallied with a pair of wins Saturday.

“I was proud of them for the way they bounced back,” PV head coach Kevin Werth said. “We should have gotten out of here 4-0, but we’ll learn from our mistakes. I like the way we’re swinging the sticks, and I told the girls after that game that we need to take pride in our defense and work to get better at it.”

PV finished the tournament in third place. PV, Aztec and Bernalillo all finished the weekend 3-1, but Aztec won the tiebreaker on runs allowed. Cleveland went 4-0 to win the title.

Bloomfield went undefeated in Friday's doubleheader but winless in Saturday's two games, falling 4-0 to Bernalillo and 8-4 to Silver during the Linda Crabtree Softball Challenge. 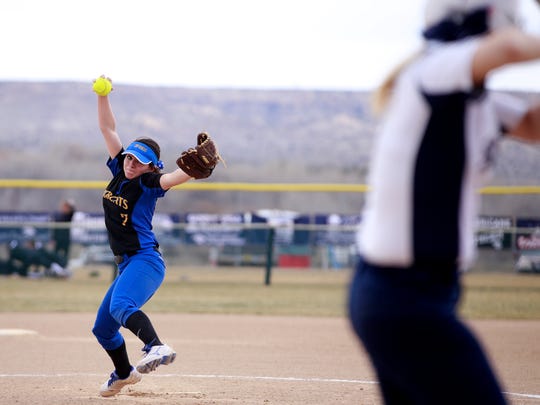 Bloomfield's Thalia O'Neal winds up during a game against Silver on Saturday at Farmington Sports Complex in Farmington. (Photo: Steve Lewis/Daily Times)

The Lady Bobcats couldn't get anything going at the plate in the Bernalillo game.

"Our bats were not on this morning. There were a ton of strikeouts," Bloomfield coach Andi Clark said. "I think we had five hits the whole game."

The offense picked up for Bloomfield in the second game right off the bat, as Thalia O'Neil slugged a grand slam in the opening inning. But Silver went on to score eight unanswered runs en route to victory.

"We made a few mental errors in that one," Clark said. "And we couldn't do much when we got on base. We're young, and we have a long way to go, but I came away from that game feeling pretty good."

It was a tale of two games for Kirtland Central on Saturday.

The KC boys lost a slugfest to one of Piedra Vista's junior varsity teams — PV Navy — by a score of 11-8 in the first half of a doubleheader, before crushing Los Alamos 16-0 to cap the day.

"It was two different teams," KC coach Cody Gilmore said. "We just came out hammering the ball against Los Alamos."

Shiloh Lewis was the losing pitcher in the first game, while Andrea Weaver picked up the win against the Lady Hilltoppers, with a four-strikeout effort through five innings.

Nikki Begay went three for four with a double and two RBI against Los Alamos. Madison Love was four for four.

The 1-4 Lady Broncos will play at Bloomfield Friday.