Bloomfield's Kaity Brown launches a shot toward the goalkeeper box during Wednesday's practice. After scoring at least six goals in three of their last five matches, the Bobcats look to prolong this latest scoring surge.(Photo: Matt Hollinshead/The Daily Times)Buy Photo

BLOOMFIELD — The Bloomfield girls soccer team has turned up the heat on its opponents.

The Bobcats have scored six goals or more in three of their last five matches. And with District 1-5A play just around the corner, the Bobcats intend to prolong their scoring surge.

"I've never been in a situation where I've had the opportunity to score as much. Seeing the offense work as well together as we have been, it's just great," sophomore forward Danakah Taylor said. "It's harder for other people to keep up when you play super fast."

To combat faster, pressing foes, Bloomfield is constantly pushing the pace and going on the attack.

"It just puts a little fear into (opponents), and they know we're here for business," senior midfielder Vanessa Harris said.

“It’s the intensity that’s making me so excited. This year, we seem to be coming right out of the gate with it. I have a lot of fast girls, and we’re trying to use them in the best places we can to keep the ball on the offensive side,” Jones said. “I really hope it’s going to pay off (come district play).”

“We’re trying to keep the game fast,” Jones said. “I have replacements to put in and give people a break so that we can stay fast the whole game, and I think that’s helping us.” 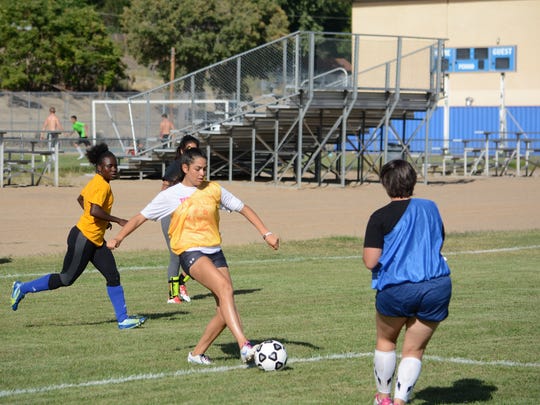 That scoring unit is also a fast one, well suited to face fast-paced squads like district foes Farmington and Aztec.

"We know they'll be fast. They will be a hard team to defeat, and we want to be as prepared as we can and be able to stop them," Harris said. "By training to be the fastest, then we'll be able to keep them at bay." 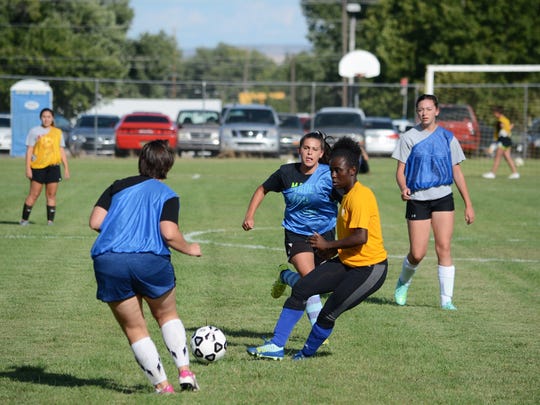 Bloomfield's Vanessa Harris, in yellow, passes the ball down the right side during Wednesday's practice. (Photo: Matt Hollinshead/The Daily Times)

Bloomfield looks to take more shots to keep the pressure high. The Bobcats also plan to use more cross passes and score more goals off those cross passes.

"The more time the goalie's shot on, the more times the defense gets beat, the more frustrated they become," Jones said.