Kaylee Madewell and Autumn Petersen each scored second-half goals to help Aztec roll past Kirtland Central on the road. 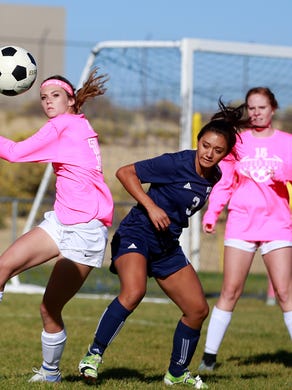 FARMINGTON — The Kirtland Central girls soccer team gave Aztec a much better game tonight than it did when the Lady Tigers won 5-0 on Sept. 20, but the Lady Broncos still couldn't pull off the upset.

Kaylee Madewell and Autumn Petersen both scored goals after halftime to propel Aztec (10-6, 5-1 District 1-5A) past KC 2-0 today at Bronco Stadium in Kirtland.

"We kept up the intensity," Lady Broncos coach Chad Kimball said. "We played a much faster style of game today, and that's what we really need to do against Farmington (on Tuesday) to keep them on their toes."

The Lady Broncos (5-9, 2-4) defense packed the box in front of their goaltender, making it tough on Aztec to find any room to score.

Lady Tigers coach Kelly Kelso said the Lady Broncos played with more urgency than they did when the teams met in September.

"They were on their home field, and they looked a lot more aggressive," Kelso said. "It wasn't a bad game for us, it just took us a lot of time to figure things out."

Aztec didn't score until the 15-minute mark of the second half.

The Lady Broncos were nonexistent on offense with just one shot on goal. They had two decent scoring opportunities in the first half, according to Kimball, but only put one of them on net.

In their final tuneup before Saturday's showdown with Albuquerque Academy, Farmington cruised past Gallup 7-0 at Hutchison Stadium today.

The Lady Scorpions (11-2-1, 6-0, District 1-5A) missed scoring opportunities left and right in the first half, but looked sharp after the break with six goals.

"It was nice to see us break out like that because it was like we finally found our rhythm," Farmington coach Brynn Chavez Cochran said. "The first half looked like the game against Bloomfield where we missed on too many good looks."

Narcissa Fowler was instrumental in the win with four assists. Arin Coleman, Felicia Moseley and Eliza Merrion all scored twice.

A scheduling mishap might have gotten into the heads of the Lady Bobcats today.

Bloomfield (10-6, 4-2 District 1-5A) coach Shannon Nygren said her team was originally told to meet at one location in Gallup for the game against Miyamura (3-13, 1-5), but when no one was there, the coaches and players had to scramble to find the correct field.

"We don't want to make excuses, but we didn't get there until about 30 minutes before it was time to warm up," Nygren said. "Then, I don't know, the girls weren't ready to play. They didn't really show up."

Bloomfield's leader in goals, Teagan Mosley, did show up when others did not, netting a breakaway goal in the first half.

The Lady Bobcats visit Aztec on Tuesday. The last time they played Aztec, the Lady Tigers got the best of them with a 4-0 win on Bloomfield's home field.

Piedra Vista coach Adam Huff was at a loss for words following his team's 7-0 home loss to Rio Rancho this afternoon.

Rio Rancho (9-4-2, 2-1-1) scored two minutes into the game, and then bombarded the Lady Panthers with a flurry of three goals over the next 15 minutes. Huff said he wasn't sure what the deal was with his girls.

"This could be one of those stories where you could say I could not be reached for comment after the game, and I'd be perfectly fine, 'cause I don't know what to say about this one," Huff said.

The Lady Rams took a 5-0 lead into halftime, where Huff challenged his team to keep fighting.

"I just said, 'We're going to see how much pride you have — pride as a team and pride as an individual,'" Huff said. "They're still playing hard, that's not been the problem. We just haven't stepped up to the (6A) level yet, and we're still working to get to that point."

PV has played every team in 1-6A once, and now the second loop begins Saturday, when Cibola visits the Lady Panthers for a noon game.