Kirtland Central blew a late-game 1-0 lead when Riley Barber scored twice for Aztec to propel the Tigers to victory. 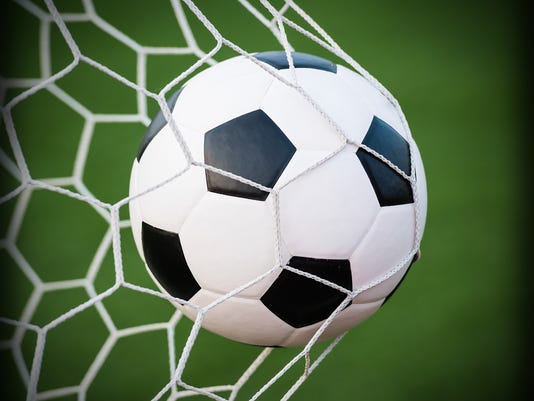 But KC learned you can only keep a great player down for so long.

Camacho marked Barber all afternoon and did a good job of keeping the senior out of rhythm, but Barber still sneaked past the Bronco defense twice in the second half to notch both of Aztec's goals. He helped his Tigers (7-7-1, 5-1 District 1-5A) come back and beat KC 2-1 at Fred Cook Memorial Stadium.

"Tim Smith made a couple nice, long passes up the left side, and both times, Riley just outran everybody and punched a couple into the net," Parks said.

Though his team coughed up a late lead, KC coach Noel Camacho said he was proud of his team, which lost 6-1 to the Tigers in Kirtland on Sept. 20.

"I've been preaching to the boys that they've got to step up, they've got be first to the ball and first to pressure the ball, and that message finally got through today," Camacho said. "They played their hearts out."

The Broncos visit Farmington on Tuesday, while Aztec also hits the road, to clash with Bloomfield.

Though the Bobcats have just one victory on the year, Parks said he's telling his players to treat their opponents like a top-tier team after nearly falling at home today.

"(Kirtland Central) was much more prepared and ready to play than us, and I tried to tell my guys they weren't going to be the same team as last time," Parks said. "So, hopefully, they know now that we have to treat every game like it's a playoff game. You can't have a letdown against any team, because they'll come and beat you."

The Scorpions continued to crush the competition today, disposing of Gallup 13-0 on the road.

“We were obviously extremely efficient tonight. The last few games we weren't putting as many balls in the back of the net like we should have, so maximizing opportunities is something I emphasized for tonight.”

Farmington coach Byron Farnsworth said he's been coaching his boys up to treat every opponent like a state champion, and his team took heed against the winless Bengals.

"We were obviously extremely efficient tonight," Farnsworth said. "The last few games, we weren't putting as many balls in the back of the net like we should have, so maximizing opportunities is something I emphasized for tonight."

Yosmar Ruiz and Ned Merrion lit up Gallup with a hat trick apiece. Joey Rodriguez and Carlos Medina both scored twice, and Edgar Viveros, Tray Kelley and Hugo Gutierrez chipped in one goal each.

Farmington hosts Albuquerque Academy — which defeated the Scorps three times last year, including in the state playoffs — on Saturday morning.

District 1-6A opponents continue to defeat Piedra Vista, but coach Carlos Yllescas' Panthers are putting forth better efforts each and every outing.

Yllescas said there's been gradual improvement out of his players in each game.

"You can see we're slowly catching up," he said. "We're new here, and the players are understanding that on the big stage, you have to be physical and aggressive, and we're doing better at that every time."

PV battled the Rams (8-8, 2-2) to a 1-1 stalemate after halftime, the first time they've been even with an opponent in any half in the last three games.

"It was a beautiful kick," Yllescas said, of Cross' goal. "That's his area. He practices that every week."

Goalie Pablo Millaruello made a number of great saves in the second half, according to Yllescas, to keep Rio Rancho from extending its lead.

The Panthers stay on the road for Saturday's game at Cibola.