The Navajo Prep girls soccer team battled through adversity and picked up a 3-2 win over ATC today.

Navajo Prep's Taryn Yazzie meneuvers around a pair of defenders from The Academy for Technology and the Classics during Tuesday's match at Eagle Stadium. Steve Lewis/The Daily Times
Fullscreen

Navajo Prep's Megan Wato, right, and The Academy for Technology and the Classics' Justice Salazar fight for the ball on Tuesday at Eagle Stadium. Steve Lewis/The Daily Times
Fullscreen

Navajo Prep's Audrey Shorty runs down a loose ball during Tuesday's match against The Academy for Technology and the Classics at Eagle Stadium. Steve Lewis/The Daily Times
Fullscreen

FARMINGTON — The Navajo Prep girls soccer team battled through adversity and picked up a 3-2 win over Academy for Technology and the Classics today at Navajo Prep.

The Lady Eagles saw leading goal scorer Naakii Brown go down with an injury in the opening minutes, but responded to the loss with an impressive performance to get the win.

“The rest of the team had to step up and play without her,” Prep coach Stacy Irwin said. “We had lots of shots on goal, but we need to finish better. Our defense played well, and our midfield was solid.”

Geena Tsosie scored two goals in the win, while Audrey Shorty added what would be the game winner midway through the second half.

Prep will play at Desert Academy on Friday. 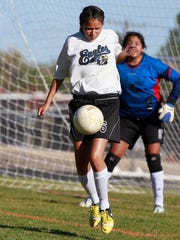 The Farmington girls soccer team slipped away from Bloomfield, edging the Lady Bobcats 2-1 today in Bloomfield.

The Lady Scorps were in control most of the game, getting numerous shots on goal, but couldn’t find a way into the net.

“We kept the ball in their side almost the whole game, we just couldn’t get anything in goal,” Farmington coach Brynn Chavez said. “Our shots were hitting off of the posts, the crossbar and (Bloomfield’s) goalie.”

In goal for the Lady Bobcats was Kara Watchman, who has shift back and forth from goal and midfield this season.

“We made some adjustments to play pretty defensively because we were expecting Farmington to come out strong, so we put Kara in goal,” Bloomfield coach Shannon Nygren said. “Kara is a good field player, but she’s by far best goalkeeper I’ve seen come out of Bloomfield.”

Farmington scored its first goal in the opening minutes when Arin Coleman put a shot past Watchman.

Bloomfield tied the match midway through the second half with a goal from Kenzie Massaro.

Farmington retook the lead with about 10 minutes remaining when Mikayla Aragon placed a free kick in the corner of the goal, never giving Watchman a chance to make a play on the ball.

Farmington will host Gallup on Thursday.

Bloomfield will play at Miyamura.

The Aztec girls soccer team had little trouble with Miyamura, cruising past the Lady Patriots 7-0 tonight in Aztec.

“They looked good. We had good possession and patience,” Aztec coach Kelly Kelso said. “We had lots of opportunities, and Miyamura’s keeper and defense did a good job tonight to keep it from being a 10-0 game. I don’t think (Miyamura) had a shot on goal.”

Autumn Petersen led the Lady Tigers with four goals. Sierra Sanders finished with two goals and one assist, while Kaylee Madewell rounded out the scoring with a goal and two assists.

Aztec will play at Kirtland Central at 4 p.m. on Thursday.

The Kirtland Central girls soccer team started strong and coasted to a 5-0 win over Gallup today in Gallup.

“Things went pretty well. We got all five of our goals in the first half,” KC coach Chad Kimball said. “We dominated the first half. In the second half we were a little flat, but we were able to get some younger girls playing time.”

KC will host Aztec on Thursday.