Scorps dominate in 5-0 win over Aztec

FARMINGTON — The Farmington boys soccer team showed its dominance of District 1-5A with a 5-0 win over rival Aztec today at Fred Cook Memorial Stadium in Aztec. 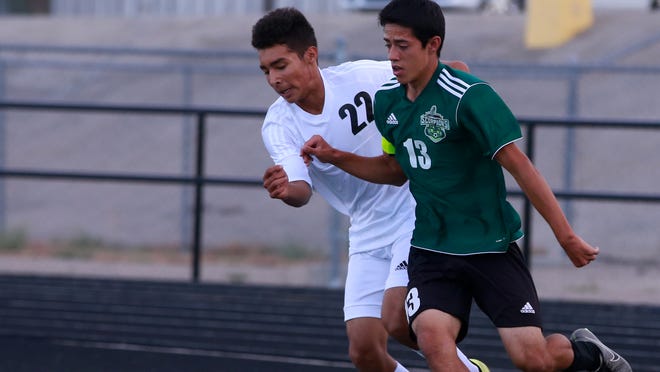 Aztec entered the match with a game plan focused on stopping Farmington’s explosive attack and kept the Scorps in check for the first half.

But when the second half began, with Farmington leading 1-0, the Tigers’ plan began to show weaknesses when Aztec showed fatigue and the Scorps started picking their way through the defense.

“We’ve been working on stuff all week to find pockets in the high-press defense Aztec plays,” Farnsworth said. “The boys were patient and struck when we had opportunities.”

“We did create a few opportunities. Not as many as we would have liked, but it was one of those game when if you have an opportunity, you need to capitalize on it,” Aztec coach Stephen Parks said. “It was a hard-fought game. District games are always a battle. We just couldn’t get one in the back of the net.”

The Bloomfield boys soccer team earned its first win of the season today, knocking off Gallup 2-0 in Gallup.

“It was nice to get that (first win). I know they were excited about it,” Bloomfield coach Scott Reid said. “I’m just happy they’ve continued to work hard. A lot of our guys who are younger and learning. They created a lot of opportunities tonight, and they had fun.”

Both Bloomfield goals came in the second half with Manny Cuevas and Isaiah Natoni getting the goals.

The Bobcats will try to make it two in a row when they host Kirtland Central (3-6, 0-3) on Thursday.

The Kirtland Central boys soccer team hasn’t been able to find a sense of urgency during its last four games, and all have ended with a loss.

“The boys are playing flat footed,” KC coach Noel Camacho said. “They’re sitting back and waiting, and not wanting to be the first to the ball. The other team just outworked them.”

Josiah Jenks scored the Broncos goal on an assist from Marco Camacho.