The Farmington girls soccer team dominated all aspects of its match against Kirtland Central today. 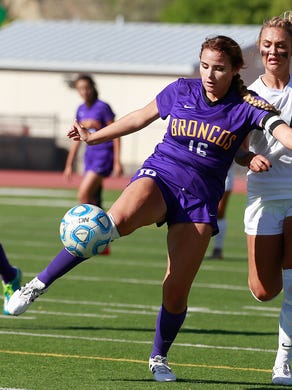 Farmington's Arin Coleman gets control of the ball during a game against Kirtland Central on Thursday at Hutchison Stadium. Steve Lewis/The Daily Times
Fullscreen

Farmington's Arin Coleman gets control of the ball during a game against Kirtland Central on Thursday at Hutchison Stadium.(Photo: Steve Lewis/The Daily Times)Buy Photo

FARMINGTON — The Farmington girls soccer team dominated all aspects of its match against Kirtland Central today at Hutchison Stadium.

The Lady Scorps controlled possession with clean passing and used their speed to get behind the KC defense while their size and physicality on defense thwarted any KC opportunities in a 6-0 win.

“Overall, they did really well,” Farmington coach Brynn Cochran said of the Lady Scorps. “The first half, I was frustrated because we’d lose the ball, and we didn’t have the fight to get it back. That’s one thing I love about this team — we always have that fight, and we lost it a little in the first half. But in the second half, they gave it 100 percent to get it back.”

Felicia Moseley opened the scoring seven minutes into the first half. Prior to the goal, McKenzie Coleman sped down the left side of the field to beat KC’s defense, giving the freshman a chance to take a shot herself. But at the last second, Coleman fed the ball to Moseley in front of the net for an uncontested goal.

Midway through the first half, Arin Coleman, who had near misses on her first four shots of the day, finally connected to put the Lady Scorps up 2-0.

Farmington had numerous chances to create a bigger lead in the first half, but struggled to put its shots on goal.

In the second half, Farmington (7-2-1, 2-0 District 1-5A) fired in three goals in the opening seven minutes to blow the match open.

Moseley connected on her second goal of the day when KC’s clearance attempt on a Farmington corner kick fell to her feet near the top of the box. Two minutes later, the Lady Broncos (3-7, 0-2) were called for a hand ball in the box, giving a penalty kick to Farmington, and Aubriana Lopez calmly put the ball in the back of the net.

A couple of minutes after Lopez’s goal, Arin Coleman made a run down the left side of the field, and held off a KC defender to maintain possession before turning back to the middle of the field and firing in a shot to make it 5-0.

Coleman recorded her third goal of the match about 20 minutes later when KC’s keeper mishandled the ball on Coleman’s shot, and it rolled across the goal line.

“(Farmington’s) offense was so well organized, and they have excellent speed up front, and that made it really tough for our girls,” KC coach Chad Kimball said. “We had to really drop back to try to negate their speed, but it gave a little too much space in the midfield to keep control of the game.”

The Aztec girls soccer team put constant pressure on Bloomfield, wearing down the Lady Bobcats for a 4-0 victory today at Bobcat Stadium in Bloomfield.

“We had a lot of opportunities that we didn’t finish, but I think we played well,” Aztec coach Kelly Kelso said. “It was a good game, and Bloomfield defended well.”

Entering the game, Bloomfield (7-5, 1-1) put an emphasis on clearing the ball wide on defense instead of playing it back into the middle of the field where Aztec could regain possession and fire shot after shot at the goal.

“It worked when the girls did it,” Bloomfield coach Shannon Nygren said of the defensive game plan, “but a lack of communication was 100 percent what led to those goals. Instead of calling who we were passing the ball to, the girls would say anything and just kicked the ball.”

Bloomfield had a few scoring opportunities, but for most of the match, the Lady Bobcats were pushed back.

The Navajo Prep girls soccer team couldn’t find an answer for Moriarty (7-6-1), falling to the Lady Pintos 5-0 today in Moriarty.

“We, as a team, lost the fundamentals on how to defend and possess as a team on an offensive attack,” Prep assistant coach Leroy Nelson said. “We had our opportunities on goal, but we couldn’t finish.”