The Kirtland Central girls soccer team had been itching to get back on the field and topped Prep 4-0 today.

FARMINGTON — The Kirtland Central girls soccer team had been itching to get back on the field.

It had been 16 days since the Lady Broncos' last match, and when they finally took the field today against Navajo Prep, they quickly showed the improvements they’ve made en route to a 4-0 win at Eagle Stadium.

“It was tough for the girls because it’s hard to see the improvements you’re making,” KC coach Chad Kimball said of the long break. “It was a lot of reassurance today that we’re doing the right thing and making a lot of progress. We’ve been working on our midfield a lot, and I felt like today our center midfielders did a great job feeding the ball to our forwards.”

KC found the back of the net twice in the first 14 minutes, getting goals from Nikki Begay and Christine Young.

The second KC goal seemed to wake up the Lady Eagles, who began playing more aggressively for the final 20 minutes of the first half and put pressure on KC’s defense. But Prep couldn’t take advantage of its opportunities. 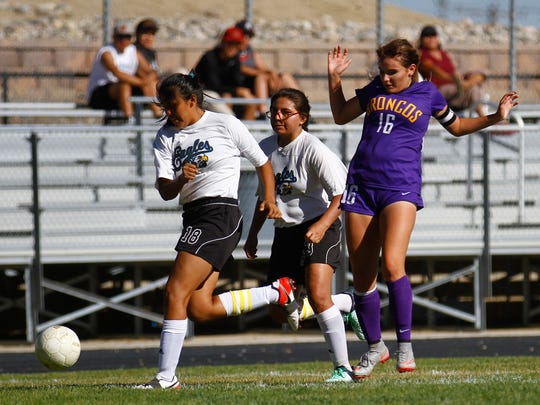 KC dominated the second half, keeping the action in Prep’s defensive half of the field. Part of the issue for Prep in the second half was the Lady Eagles’ struggles to stay in the new formation their coaches implemented for the match.

“We kind of changed the formation to the team we were playing, and that was our coaches’ mistake,” Prep coach Stacy Irwin said. “We’ve been playing a 4-3-3 (formation) and I think the girls were used to that formation and kind of shifted back to that from the 4-4-2 we implemented for (KC).”

KC added its third and fourth goals of the day on shots from Areli Saunders and Alexa Manning. 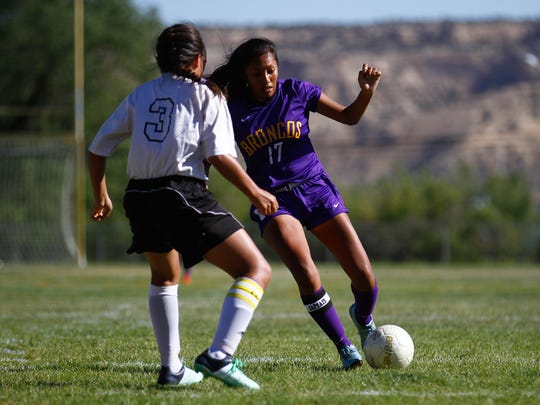 KC will play at Socorro (7-2) on Saturday in a rematch of last year’s A/4A state quarterfinals match, which Socorro won 1-0 in overtime.

Prep will host Miyamura (1-6) on Tuesday.

The Farmington girls soccer team suffered its first loss of the season today, falling 7-1 to St. Pius X (3-3) at the Albuquerque Academy Invitational in Albuquerque.

The Lady Scorps (3-1) will continue play at the tournament on Friday, facing Goddard (4-5).

Aztec coach Stephen Parks said even though it was a lopsided loss, he thinks the Tigers are starting to find their stride.

“Once again, it’s hard for me to say it was just rough, and we didn’t play well because the kids are giving me everything they have, and they continue to progress and get better,” Parks said. “We saw some positives today, and there’s no quit in them, and that’s what we need.”

Aztec (2-6-1) put some pressure on the Demons (3-1) in the second half, but couldn't get the ball in goal to avoid the shutout.

The Farmington boys soccer team controlled possession and dictated the majority of its match with Cleveland. But a rough stretch for a few minutes of in the second half allowed the Storm to score two quick goals and earn a 2-1 win over the Scorps in the first round of the Albuquerque Academy Invitational today in Albuquerque.

“The PK kind of took the air out of us. Other than a five-minute stretch where they got their two goals, we were pretty much in control the whole game,” Farmington coach Byron Farnsworth said. “They were just able to capitalize on us dropping our heads for a little bit.”

Farmington’s goal came in the first half when the Scorps moved the ball through the Storm’s defense and found Yosmar Ruiz for the goal.

Farmington will continue play at the tournament against Los Alamos (5-2) on Friday.