The Wildcats cleaned up on a pair of set-piece goals.

Piedra Vista's Angel Flores, who scored twice on Saturday, kicks a ball during a game with Lovington at the Aztec Invitational at the Aztec Tiger Sports Complex.(Photo: Steve Lewis/The Daily Times)Buy Photo

AZTEC — The Piedra Vista boys soccer team blew a 2-1 lead inside the final five minutes of regulation against Lovington today, and the Panthers lost the Aztec Invitational championship trophy and their early-season unblemished record as a result.

The Wildcats cleaned up on a pair of set-piece goals. The first came with a little more than four minutes to go in regulation to tie the game 2, and the second came with 1:15 to go in overtime to seal the 3-2 comeback victory over PV at the Aztec Tiger Sports Complex.

PV coach Carlos Yllescas said there's nothing the Panthers (2-1) can do now except treat the painful loss as a learning experience.

"We had the title in our pocket and, mentally, we thought, 'Oh, it's over,' but soccer is not over until the last whistle," Yllescas said. "So we're going to the Los Alamos tourney with a different mentality."

Yllescas said he likes what he's seen out of Flores in the early going.

Lovington (3-0) played with a sense of urgency toward the end of the game, and it paid off. In overtime, junior Tony Peciado redirected a set-piece kick off his head and into the goal. Yllescas said he thinks the entire breakdown could have been avoided had PV just put a better emphasis on controlling the ball late in the contest. 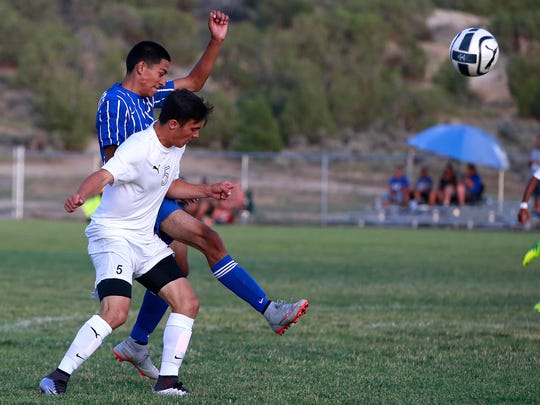 "Passes have to be important, keep the ball. A few minutes left? Keep the ball," he said. "We have to be tight. Connect on passes, be aggressive and control the ball more. We give the ball away to them in the last five minutes of the game, and that's what happens."

PV will try to rebound in the Louis Cernicek Tournament, which will be hosted by Los Alamos and starts on Friday