The Aztec girls soccer team was able to get past rival Piedra Vista in a wet and windy dual season finale.

Aztec's Paige Adair (17) kicks the ball away on Thursday during a game against Piedra Vista at the Piedra Vista High School soccer fields in Farmington. Alexa Rogals/The Daily Times
Fullscreen

Piedra Vista's Paola Tostado runs after the ball on Thursday during a game against Aztec at the Piedra Vista High School soccer fields in Farmington. Alexa Rogals/The Daily Times
Fullscreen

Piedra Vista's Aspyn Tracy, right, gets control of the ball on Thursday during a game against Aztec at the Piedra Vista High School soccer fields in Farmington. Alexa Rogals/The Daily Times
Fullscreen

Aztec's Kinsey Gomez gets control of the ball on Thursday during a game against Piedra Vista at the Piedra Vista High School soccer fields in Farmington. Alexa Rogals/The Daily Times
Fullscreen

Piedra Vista's Tyra Garcia kicks the ball back into play on Thursday during a game against Aztec at the Piedra Vista High School soccer fields in Farmington. Alexa Rogals/The Daily Times
Fullscreen

Piedra Vista's Tyra Garcia (5) tries to get control of the ball on Thursday during a game against Aztec at the Piedra Vista High School soccer fields in Farmington. Alexa Rogals/The Daily Times
Fullscreen

Aztec boys lock up second place in District 1-5A, Kirtland girls lose a close one to Bosque 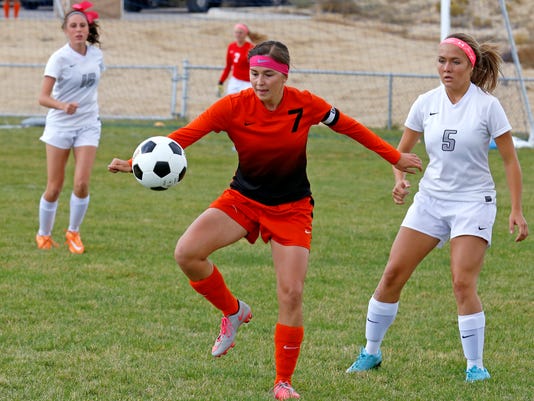 Aztec's Kinsey Gomez gets control of the ball on Thursday during a game against Piedra Vista at the Piedra Vista High School soccer fields in Farmington.(Photo: Alexa Rogals/The Daily Times)Buy Photo

FARMINGTON – Wind and rain affected Thursday’s dual season finale between the Piedra Vista and Aztec girls soccer teams, and those conditions may have even helped the Lady Tigers score the goal that clinched second place for them in District 1-5A.

Late in the second half, Aztec’s Kinsey Gomez scored a rebound goal after a shot bounced off the crossbar and through the hands of PV goalie Kristina Schwab. That would be all the Lady Tigers needed to win the game 1-0 at the PV soccer fields.

Lady Panthers coach Adam Huff referred to the goal as a “bad bounce” for his team and thought the wet conditions factored into the scoring sequence.

“The ball kind of ricocheted, and (Aztec) was able to clean it up,” Huff said. “It’s just a bad bounce that, maybe if the ball’s not wet, the keeper grabs it, but ... things like that happen.”

Both Huff and Aztec coach Kelly Kelso thought the game was highly competitive.

“PV came out hard. It was their senior night,” Kelso said. “Both teams had some good chances. In the last 30 minutes of the game, we pretty much controlled the ball. It was a good test for us. We obviously needed the win.”

Seedings for the state tournament will be drawn on Sunday.

The Lady Scorpions finished off a fantastic regular season by scoring five times in the second half to top Miyamura 5-0 on Thursday at home.

Hannah Kelley and Arin Coleman scored two goals apiece for Farmington (18-2, 8-0 District 1-5A), which has a shot at drawing a bye in the first round of the state tournament. Alexis Velasquez also picked up a goal in the win.

A motivational speech from coach Shannon Gill was needed to light a fire under the Lady Scorps at halftime, as they played Miyamura (5-12-1, 1-6-1) to a scoreless first half.

“I had to explain to the girls that Miyamura came to play,“ Gill said. “They knew they weren’t afforded the luxury of preparing for the state tournament.”

On top of her goal, Kelley had two assists. Coleman, Raimi Clark and Payton Sandoval-Belt all registered one assist for the District 1-5A champs.

The Lady Broncos couldn’t close the season out with a win, but at least they can say they gave a very talented Bosque team all it could handle.

“We had a couple of opportunities that we didn’t capitalize on,” KC coach Chad Kimball said. “Our goalie Jayden Guillory gave us an excellent game, and our defensive line picked it up, as well. Really kept (Bosque) off the board after their fast start.”

The Lady Bobcats scored twice in the game's opening minutes.

Kirtland’s goal came on a free kick off the foot of Nikki Begay nearly 15 minutes into the second half.

The Aztec boys soccer team locked up second place in District 1-5A with a 7-0 win over Piedra Vista (5-15, 4-4) Thursday night at Fred Cook Memorial Stadium in Aztec.

“They played extremely well,” Aztec head coach Steve Scales said of the Tigers. “It was our senior night, and all the boys banded together to give the seniors one last game, and they did fantastic. We controlled possession and did what we do best – we passed it around and got some good shots.”

Bailey Watkins wasted no time scoring the match’s first goal, finding the back of the net about two minutes into the match.

Riley Barber, Talon Ketring and Brandon Stafford all scored goals in the win.

Aztec is waiting to see if it will be named to the 5A state tournament field. Scales said the team will know sometime Monday if it made the cut.

“We’ll look at everything tomorrow in detail,” Scales said. “I’ll do my part as a coach and get everything looked at. The boys did their part, and I commend them on a great season.”

“The boys played fantastic. From the start of district, they continued to get better,” Farmington head coach Byron Farnsworth said. “The boys understood how important district was this season to make it a decade in a row of winning district, so they wanted to finish strong.”

The Scorps will host Hope Christian today to close out the regular season.

“Hope is a good team that always competes,” Farnsworth said. “They have a few really special players on their team, and we’ll have to work hard to slow them down.”

Hope Christian’s offense came alive in the second half of its match with Bloomfield, scoring seven goals in the final 30 minutes to topple the Bobcats 9-3 Thursday in Bloomfield.

“We let a couple slip by us, and it was kind of a domino effect after that,” Bloomfield head coach Scott Reid said. “Hope does a great job passing the ball, and when they get a shot outside of the box, they know where to put it.”

Edgar Fonseca scored two goals for the Bobcats. Sammy Gutierrez recorded the other goal in the loss.