Pros become part of the family at San Juan Open 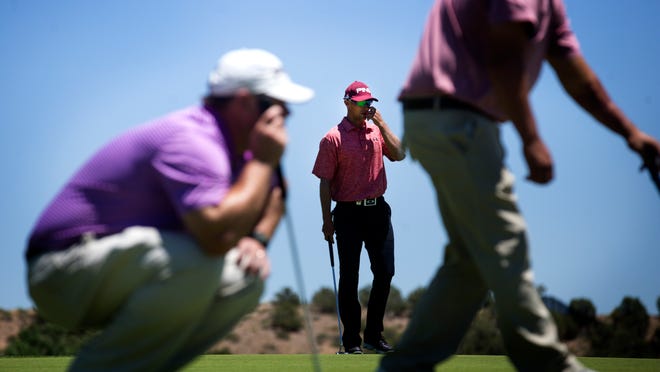 FARMINGTON — The San Juan Open offers a bit of everything for professional golfers.

It has been one of the premier tournaments in the region for years, regularly offering the largest purse to go with four rounds of play on the carefully manicured grounds of the San Juan Country Club.

"The golf course is in way good condition right now," said Joel Aston, the assistant pro at the SJCC, after Thursday's first round. "(Superintendent) Roy (Johnson) did a really good job on the course and the greens. It's great."

Every year, players rave about the condition of the course. But the money to be won and the quality of the course are just a fraction of what keeps bringing players back year after year.

"A lot of it is the people. There are such great people here who take care of you. It makes it feel almost like a home tournament," said Derek Tolan, who earned his first professional win at the SJO in 2009. "Also, the food is amazing, and I love the golf course. Some people critique it a little, but I think it's so much fun. It forces you to hit some really good shots you won't find at other courses. I've had success at other courses because I've drawn from my experience playing here. It's an easy course where you'll have to hit some of the hardest shots you'll ever have to hit."

While the course, the people and the food are all great factors in drawing a loyal tournament field every year, none are what makes the San Juan Open the special event that it is.

The tournament features a pro-sponsor aspect to the week, similar to a traditional pro-am with a wrinkle. The pro-sponsor part of the tourney typically results in the same pros playing with the same amateurs every year. With the pros playing three of the four rounds with their sponsor the two often build a friendship that over time creates a bit of a family vibe.

One such case is tourney regular Jesse Mueller, who's based in the Phoenix area, and his member sponsor Gary Moffitt and his wife Frances.

"The hospitality of Gary and Fran and the whole club is really unique to any tournament," Mueller said. "It's more of a family-type atmosphere, and you really don't feel that at other tournaments. It makes it really fun for the players to come back."

Mueller is just one of many pros who take up residence in a sponsor's home for the week. He joined up with Moffitt for the tourney seven years ago, when Moffitt selected him as his pro for the event.

Each year, members at the country club can sign up to be a sponsor for a pro, making them a team for the first three days of the tournament. The first member to sign up gets the No. 1 pick of pro players, and the duo gets to play together in future tournaments as long as the they agree to be teammates.

When Moffitt had the first pick seven years ago, he asked around, trying to get information on who would be the best pick available. The consensus was Mueller, who was having success on the Gateway Tour.

Mueller and Moffitt have played every San Juan Open together since, with Mueller staying at the Moffitts' home every year. Occasionally, Mueller's wife and son will make the trip with him to Farmington, also staying with the Moffitts. But this year, Mueller's family didn't make the trip.

"It's always a disappointment when they don't come," Moffitt said. "I've got pictures of my grandkids at my house, and Jesse's son Logan is right up there. We've got pictures from when he was born up until now."

On the course, the Mueller-Moffitt duo has been a success. They've finished near the top of the pro-sponsor leaderboard a few of times, and Mueller has finished runner-up in the professional field twice to go with a few more top five finishes. And neither plans on breaking up the team any time soon.

"I'd like to keep playing as long as Gary and Fran will have me," Mueller said.