Alcantar showcased his value to the Bobcats secondary when it matters most: the playoffs.

He’s a ball hawk, chasing it whenever it pops loose nearby.

Alcantar can push up against opposing wide receivers and help disrupt the timing of interior routes, stepping in front and taking the ball away.

Four of his six interceptions, plus one fumble recovery, occurred during Bloomfield’s 4A state finals run in 2018.

He rose to the challenge on the big stage, and that experience will serve him well entering 2019.

Phillips began emerging during District 1-4A play and in the playoffs, generating 214 of his 421 receiving yards during that late-season span in 2018.

Seventeen of his 40 total catches also came in district onward, so expect him to be targeted more often in the passing game. 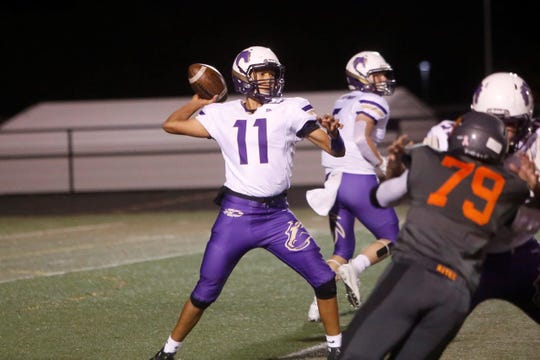 Kirtland Central's Troy White-David fires a pass down the middle against Aztec during a District 1-4A game on Friday, Oct. 19, 2018 at Fred Cook Stadium in Aztec. (Photo: Matt Hollinshead/The Daily Times)

White-David, who had 1,403 passing yards with 22 touchdown passes over seven starts, will have plenty of plenty of ammunition (Ty Jenks, Dallin Mangleson and Brock Dowdy) in the passing game to help him build on his 2018 campaign.

Begay helped extend plays and stretch out the field as a dual-threat player. He threw for 1,200 yards and ran for another 1,139, generating 41 combined touchdowns.

He can break free for the big run and also launch the deep ball.

His longest run in 2018 was for 56 yards in Newcomb’s playoff win over Lordsburg, while his deepest throw was a 65-yard touchdown pass (earlier in the season, at Lordsburg).