3 takeaways from Saturday’s 4A finals

3 takeaways from Saturday’s 4A finals 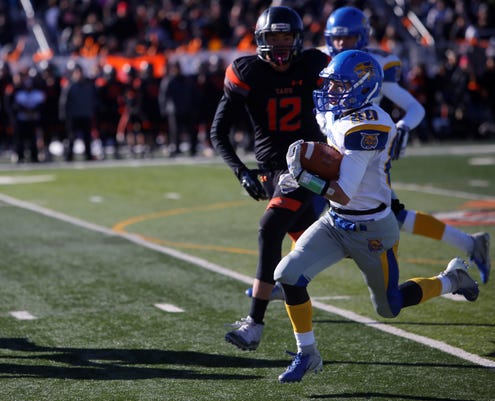 That area was problematic from the start, with Bloomfield surrendering an 83-yard kick return touchdown by Taos’ Jonathan Garcia 14 seconds into regulation.

Later on, a fairly deep punt return by Bloomfield’s Tomas Gonzales was called back well into Bobcat territory because of an unnecessary roughness penalty. The officials claimed Bloomfield made contact with a defenseless Taos player during that sequence.

Bloomfield then punted the ball into Taos territory, but the Bobcats were moved back even closer to their own goal line when they were flagged for a chop block penalty. The second punt attempt was blocked, and Taos’ Noah Armijo got his hands on the ball in the end zone for a touchdown.

In the end, those cumulative special teams woes overshadowed Bloomfield’s brighter moments on the field.

Just as it did throughout the playoffs, Bloomfield had another strong performance against another potent offense.

Taos quarterback Justin Good scrambled left and right in the pocket, trying to find an open target wherever he could. But the pressure kept coming, and Good was brought down multiple times.

Although Bloomfield lost 14-7, the Bobcats defense surrendered just 32 total points in the 4A playoffs.

And players’ claims that this year's strong playoff run won't be the end of the team's success has credibility.