Bobcat defense looks to prolong momentum in 4A finals

Bobcat defense looks to prolong momentum in 4A finals 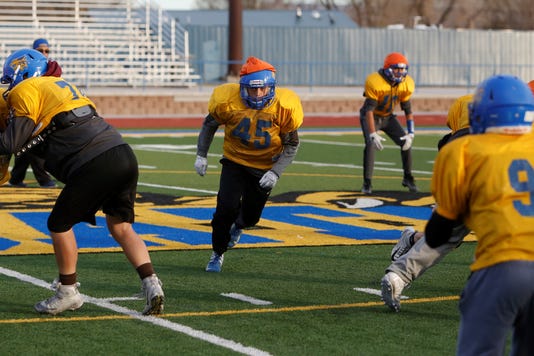 BLOOMFIELD — The Bloomfield football team’s defense continues to throttle opposing offense, and it looks to sustain that momentum this weekend and bring home its first blue trophy since 1966.

The Bobcats are brimming with confidence entering Saturday’s 4A state football title game at Taos — the school's first championship game appearance since 1990 — because they have faced and shut down potent offenses throughout their playoff run.

After topping Moriarty in the first round, Bloomfield shut out district rival Kirtland Central, becoming the only team to achieve that feat against the Broncos this season.  The Bobcats then overwhelmed St. Pius’s passing game last week with a whopping five interceptions.

“We definitely need that type of confidence. We’ve got to keep it together,” said cornerback Jesse Wortman. “We’ve just got go in there (against Taos) and hit them in the mouth, and I think we’ll be just fine.”

“All cylinders of the defense (have been key), really. The D-line’s been working hard, the secondary, linebackers ... we’ve all been on the same page working together,” said free safety Raymundo Alcantar, who had three interceptions against St. Pius.

After allowing an average of just 16.8 points a game during the regular season, Bloomfield (9-4) has been even stingier of late, surrendering just 18 points in its three playoff games.

Bobcat defenders have stuck with a simple motto when it comes to the opposition: If they can’t score, they can’t win.

Taos is another high-scoring team, averaging 42.8 points a game, but Bloomfield has demonstrated it can withstand such firepower, at least thus far.

The Bobcat defensive front has made a habit of applying continuous pressure attacking the pocket, and the linebackers are pushing up to aid the linemen with quick group tackles.

The secondary is making well-timed contact and knocking the ball out of opponents’ arms. The defensive backs also are pushing up to the line of scrimmage to make key tackles, especially when opponents have little to no choice but to run the ball.

“Everybody’s right there on the hit. Everybody gets excited, and you keep that energy throughout the entire game,” Wortman said.

Bloomfield has forced 45 turnovers this season entering Saturday’s title game, a trend it hopes to continue in its pursuit of the state title.

“It’s been really nice just to have everybody go to their gaps and hit their holes. It’s been a really big key in our success … stopping big drives and making big plays on turnovers,” nose tackle Vince Marquez said.