Chieftains beef up 2018 schedule as independent

Chieftains beef up 2018 schedule as independent 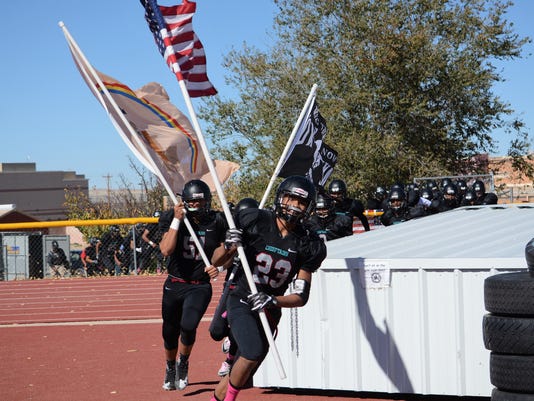 Tyris Newton leads the Shiprock football team onto the field for the Chieftains' district home game against Thoreau on Oct. 28. Shiprock will be an independent in football in 2018.(Photo: Daily Times file photo)

SHIPROCK — Although a request by the Shiprock High School athletic department to move down from Class 4A to 3A next season has been denied, football coach/athletic director Eric Stovall still wanted to beef up his team's 2018 schedule as an independent squad.

The Chieftains accomplished that goal, adding foes like 4A heavyweight St. Michael's (Oct. 6) to their schedule. St. Michael's has reached at least the 4A state quarterfinals in each of the last four seasons.

"St. Mike's is ranked No. 1 in Class 4A. It doesn't get much better than that. We're getting some of the best of the best," Stovall said.

Stovall said going independent in football gave the Chieftains the flexibility to make their schedule tougher without the constraint of being in a higher classification.

"We've got some quality ball clubs we feel like are on our competitive playing level. That'll be a good thing for us that will help us improve and get better fundamentally," Stovall said. "We felt like it was the best fit for us, where our kids are."

Stovall said he has reached out to Albuquerque High and Rio Grande, both of which will be independent in football and 5A for its other sports, about facing those two teams to wrap up the football season. He said he is waiting to hear back from about whether those contests will happen.

Despite the fact there are no playoffs for independent teams, Stovall said Shiprock will be ready to face the likes of Aztec and Kirtland Central (both 4A) after the latest district realignments expire.

The New Mexico Activities Association voted in late November to create new district realignments for the next two school years, which pits Shiprock with Aztec, Bloomfield, Kirtland Central, Gallup, Miyamura and Wingate in the new District 1-4A for all sports except football.

The NMAA voted in June to eliminate Class 6A starting with the 2018-2019 school year, with the exception of football. All other sports will feature classes 1A through 5A.

Shiprock boys basketball coach Chester Atcitty said his team would've been even more competitive in Class 3A, but he still believes the Chieftains will be fine going up against such schools as Kirtland Central and Gallup.

Part of what makes Atcitty more hopeful about his team's chances is that KC will graduate nine seniors (including all five starters) after this season.

"It opens the playing field. I think we'll be able to be in there and ruffle up things a little bit and hopefully better our odds against them," Atcitty said.