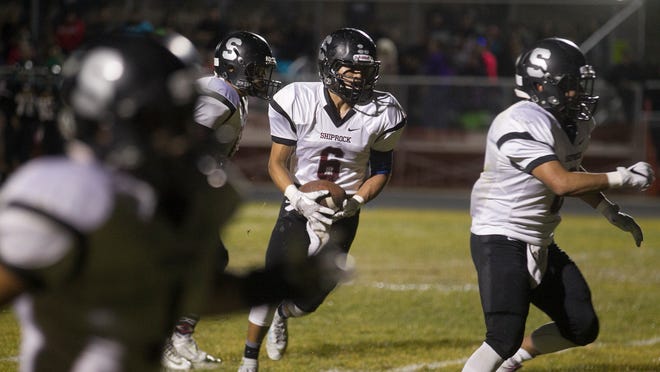 FARMINGTON — Senior tailback Quaid Shorty led the Shiprock football team to the District 1-4A title tonight, scoring all but one of the Chieftains' touchdowns in a 44-0 victory against Navajo Prep at Eagle Stadium.

"That was an exceptional performance," Shiprock coach Eric Stovall said. "And it's the entire team that came together to help him be successful."

Junior Tyris Newton scored the final touchdown of the game for the Chieftains with 9:20 remaining in the game, which ended the contest because of the mercy rule. The running clock was instituted late in the third quarter.

Two of Shiprock's four touchdowns in the first half came when Shorty caught passes from quarterback Aarwin Chee. Shorty ran the other two touchdowns into the end zone.

Shorty had a matter-of-fact reaction to his big night, saying his goal is to "try to stay humble and keep moving the ball."

He gave credit to his teammates, coaches and fans for the success and said the Chieftains' strength as a team tonight was its defense.

"We played fundamental football to shut them down," he said.

While Shorty scored six touchdowns, the Chieftains (8-2, 3-0) struggled with their conversion attempts, including several attempts at two-point plays. When Shiprock did score on a two-point conversion, it was Shorty who caught the pass in the end zone.

Stovall said hard work in the off season and the players believing in themselves was what helped the Chieftains repeat as district champions.