Farmington Scorpions got off to a strong start during its game tonight against the Aztec Tigers at Fred Cook Memorial Stadium in Aztec.

Farmington's Alex Fowler carries the ball into the end zone for a touchdown against Aztec during Friday's game at Tiger Stadium in Aztec. Jon Austria/The Daily Times
Fullscreen Farmington's Alex Fowler carries the ball into the end zone for a touchdown against Aztec during Friday's game at Tiger Stadium in Aztec.(Photo: Jon Austria/The Daily Times)Buy Photo

AZTEC — Farmington got off to a fast start in Friday's game against Aztec at Fred Cook Memorial Stadium, with Justin Williams scoring on a touchdown reception in the opening minutes, and the Scorpions rolling to a 61-18 district win.

Scorpions coach Jeff Dalton said the defense was his team's biggest strength in the game.

"It was by far the best performance they've had this season," he said. "The offense put us into some tough spots and kind of gave away 12 points, but our tackling tonight was second to none, and our defense just stayed focused the whole time and made it possible for our offense to get the ball and make plays."

Dalton said the team will keep focusing on the fundamentals while preparing for next week's game.

Aztec coach Matt Steinfeldt said the Tigers did not have many bright spots during the game.

"That was not a great performance for us," he said. "Farmington came out with a lot more energy and a lot more focus, and they played a good football game and we did not."

He said the team was hyped for the game against the Scorpions but "we didn't bring our best efforts." 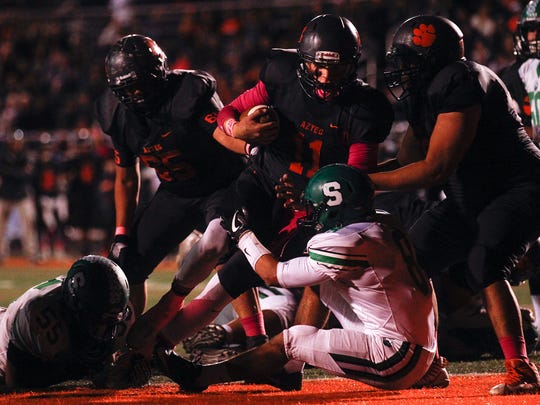 One of Aztec's key players, Justin Black, sat out the game because of an injury from the previous game. Black said he is planning on returning next week.

While the Scorps dominated the game, the host Tigers were able to take advantage of at least one Farmington error. When Farmington quarterback Isaiah Jaramillo dropped the ball in the second quarter only yards from the end zone, the Tigers gained possession, and Cody Smith ran in a touchdown.

Farmington (5-3) will be at home next week to face Miyamura. Aztec (3-5) goes on the road to take on Gallup.