Bayfield seizes control in the third quarter of Friday's game

Aztec's Zach Taylor scores a touchdown on a quarterback keeper in Friday's game against Bayfield. Jesse Hankins/Special to The Daily Times
Fullscreen

Aztec's Cody Smith fires a pass to teammate Justin Black for a first down in Friday's game against Bayfield. Jesse Hankins/Special to The Daily Times
Fullscreen

Aztec coach Matthew Steinfeldt talks to Tanner Brooks and Sebastian McNeal on the sideline during Friday's game against Bayfield. Jesse Hankins/Special to The Daily Times
Fullscreen

Bayfield's David Hawkins fights for some extra yards before getting tackled by Aztec's Justin Black in Friday's game. The Wolverines beat the Tigers, 48-21. Jesse Hankins/Special to The Daily Times
Fullscreen

Aztec played a strong first quarter, scored a final touchdown with only seconds left in the game

Aztec's Zach Taylor scores a touchdown on a quarterback keeper in Friday's game against Bayfield.(Photo: Jesse Hankins/Special to The Daily Times)

AZTEC — A touchdown and a field goal with less than 30 seconds left in the game were not enough for the Tigers in tonight's 48-21 home loss against the Bayfield Wolverines.

Aztec running back Justin Black said the team faced a mental battle after the first half, and players were not all on the same page.

"When we all get in the certain level like we were in the first half, stuff was clicking, stuff was flying and we were all having fun and then all kinds of stuff just went downhill," Black said.

Coach Matthew Steinfeldt said the team needs to review the number of penalties called against it, describing them as incessant flags on the field.

"We need to look at why there's so many penalties," he said.

Steinfeldt said the Tigers must play a cleaner game next week when they host the Piedra Vista Panthers.

The Tigers started out strong and scored the first touchdown of the game. However, Bayfield's speed tested the Tigers, and the Wolverines frequently maneuvered through Aztec's defense.

One of the Tigers' key highlights of the game came with less than a minute left in the first quarter, courtesy of Aztec quarterback Cody Smith's touchdown. 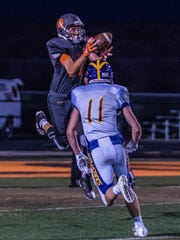 Bayfield began pulling ahead in the second quarter, up 21-14 at halftime, soon expanding its lead to 42-14 after the third quarter.

Aztec's Kenneth Grady scored a touchdown in the final seconds of regulation, but Bayfield had already seized control.