Tigers, Scorps set for rematch in 5A playoffs

One meeting this season wasn’t enough for the Aztec and Farmington football teams.

Tigers, Scorps set for rematch in 5A playoffs

FARMINGTON — One meeting this season wasn’t enough for the Aztec and Farmington football teams.

The longtime rivals went to battle on Oct. 21 at Hutchison Stadium and the Tigers eked out a 31-28 win over the Scorps. Now the two will meet again, this time in the 5A playoffs when Aztec hosts the Scorps at 7 Friday night at Fred Cook Memorial Stadium.

After shaky starts to the season, the two programs have been on a tear of late.

The Tigers have relied heavily on their passing game to power their offense. This season, junior quarterback Cody Smith has thrown for 2,472 and 26 touchdowns with just six interceptions in his 244 attempts.

Smith has also been Aztec’s featured runner, carrying the ball 145 time for 921 yards and 12 scores.

Farmington’s Kody Becenti has also proved to be a dual-threat quarterback capable of picking apart secondaries with his arm and tucking the ball for big gains on the ground.

Most of Farmington’s work on the ground of late has come from junior running back Axel Fowler, whose production has risen on a weekly basis as the Scorps’ offensive line has solidified.

In their first meeting, Farmington implemented a blitz-heavy defense to put Smith under pressure, and that helped the Scorps to a 14-0 lead.

The Tiger defense will have to stay focused on Farmington’s numerous offensive weapons, while the Scorps are sure to put a little more emphasis on stopping wide receiver Sebastian McNeal, who hauled in three touchdown catches against them in October.

The No. 12 Broncos hit the road Friday afternoon en route to Los Lunas to play the No. 5 Tigers at 7 p.m.

ESPN four-star recruit running back and University of Michigan commit O'Maury Samuels appears to be in line to start against Kirtland Central (6-4) despite only carrying the ball 13 times in the past four games.

Samuels toted the ball seven times for only 13 yards during an Oct. 14 game against Belen before missing Los Lunas' (7-3) next two contests. Samuels, who rushed for 962 yards and 10 touchdowns in just eight games this season, returned last week to rush six times for 67 yards and a score during a 69-19 blowout win over Valencia.

KC and Los Lunas faced one mutual opponent this year: Aztec. The Tigers trounced Aztec 64-20, while the Broncos lost 62-35.

The Broncos have won two games in a row, and continue to receive major contributions from quarterback Bryson Dowdy and multi-position threats Zach Van Duren and Cadan Flack.

Shiprock hosts its first playoff game since 2001 and plays in its first Saturday game of the season at 1 p.m. this weekend when Silver visits Chieftain Stadium for a first-round, 4A state playoff game. 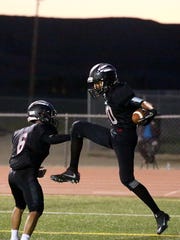 The No. 7 Chieftains (7-3, 3-0) obliterated their district competition to the tune of three straight shutouts, scoring at least 45 points in each win. Before that streak started, they defeated eventual District 1-3A champion Crownpoint 44-14.

No. 10 Silver competed in a much more competitive District 3-4A, which also sent No. 4 Cobre and No. 5 Hatch Valley to the state playoffs.

The teams last met in 2014, when Silver crushed Shiprock 49-0. They shared one mutual opponent in 2016, in Socorro, which Silver topped by 12 points last week. Shiprock lost to Socorro 42-0 in both teams' season opener.

Ben Tensay, the athletic director of the Central Consolidated School District, said he was thrilled that Kirtland Central, Shiprock and Newcomb made the playoffs in three different classes. He believes there is more success to come for all three in the future.

"It's a huge thing for our district," Tensay said. "The kids are doing well both in academics and our athletics. It's one stepping stone that we can definitely use."