FARMINGTON — The Aztec and Farmington football teams square off with District 1-5A title implications on the line. 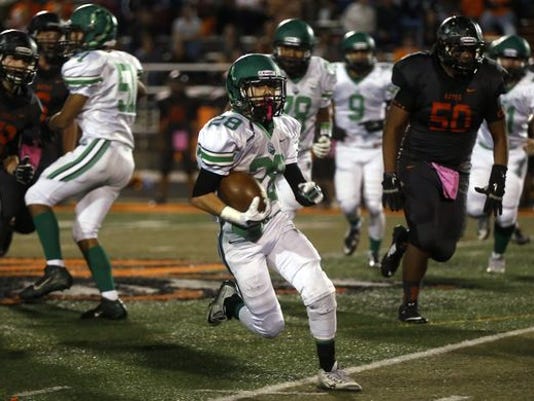 FARMINGTON — Friday’s football game between Aztec and Farmington may only be the midway point in the district schedule for the two teams, but the winner could be well in its way to the 2016 District 1-5A title.

The Scorps (2-4-1, 2-0 District 1-5A) and the Tigers (4-3, 2-0), along with Miyamura, sit atop the district standings as the three unbeaten teams in the district, setting up a pivotal matchup Friday night at Hutchison Stadium.

After a slow start to the season, when Farmington went 0-4-1 in nondistrict games, the Scorps found their groove in district play, outscoring opponents 121-39.

Aztec started similarly, dropping three of its first four games. In district action, Aztec rolled through Kirtland Central on the Tigers’ homecoming two weeks ago, then slipped past Bloomfield 30-25 last week in Bloomfield.

Aztec has won the last two meetings by a combined 10 points, including last year’s thriller that saw the Tigers score in the final two minutes to sneak past the Scorps 29-26.

With two potent offenses on the field — Aztec is averaging 30.7 points per game compared to 29.6 for Farmington — the game could come down to what defense is able to make the most stops. And that is where the Scorps appear to have an advantage on the Tigers.

Through its first seven games, Aztec has surrendered 34.7 ppg, more than 8 more points per contest than the Scorps at 26.4 ppg.

The first two weeks of play in District 1-5A have not been kind to the Kirtland Central football team. 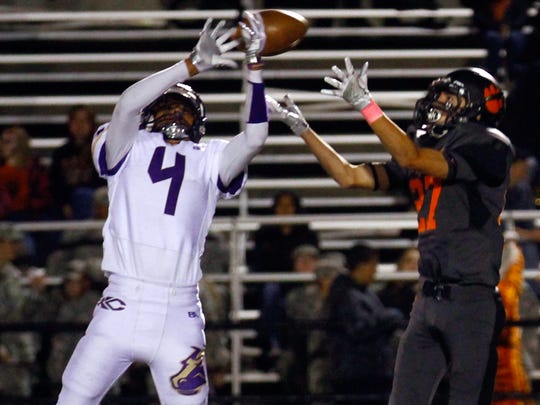 The Broncos started the district schedule with road loss to Aztec and Farmington, losing by 27 and 31 points, respectively. And things likely won’t get any easier for the Broncos, who host Miyamura Friday night for KC’s homecoming.

The Patriots (6-1, 2-0) have exhibited one of the most potent offenses in the state this season, averaging 250 rushing yards and 213 passing yards per game. Miyamura also ranks second in 5A with a little less than 43 points per game.

After dropping back-to-back home games by seven and five points to start district play, Bloomfield is searching for its first district win when the Bobcats challenge Gallup Friday night on the road.

The trip to face the struggling Bengals may be just what the Bobcats (3-4, 0-2) need to get back on track.

Gallup (2-5, 0-2) has dropped five straight by an average of nearly 35 points per game while never scoring more than 14 points in a game during the skid.

Piedra Vista suffered its first shutout of the season last week with a 21-0 loss at home to Cibola to open play in District 1-6A, and it won’t get any easier for the Panthers (5-2, 0-1), who travel to Rio Rancho to take on the defending 6A state champion Cleveland Storm Friday night.

Cleveland (7-1, 1-1) comes into the game ranked second in 6A in both the New Mexico Overtime Sports Center coaches’ poll and the MaxPreps.com rankings. The Storm’s only loss of the season came two weeks ago, as it fell 42-28 to Rio Rancho, which holds the No. 1 spot in both rankings. Last week, it beat Cibola 35-14.

Shiprock will open play in District 1-4A Friday night, hosting Wingate for the Chieftains’ homecoming.

Shiprock (4-3) is riding a two-game win streak into the district tilt and has had two weeks to prepare for the Bears following a bye last week.

The Chieftains and Wingate have been district rivals for the better part of 50 years, although the rivalry has tilted heavily in Shiprock’s favor. Since 1964, the two teams have met 36 times, with the Chieftains winning 33 of them. The last time the Bears earned a win over Shiprock was in 1974 by a score of 8-6.

Navajo Prep went through a rough stretch its first seven games, but the Eagles closed out their nondistrict schedule with a 33-12 win over Whitehorse, Utah, last week to bring some momentum into Friday night’s District 1-4A opener against Thoreau on the road.

Thoreau (1-6) has lost six straight after winning its season opener 20-12 over Tohatchi.

Prep (2-5) earned both of its wins on the road this season.

The two teams have shared one common opponent this year in Laguna Acoma, with both taking loses. The Eagles fell 14-6 on Sept. 9 while the Hawks were trounced 50-0.