Bloomfield rallies past Valencia on homecoming

Bloomfield didn't complete any passes but didn't need to, as 358 rushing yards guided the hosts to victory.

Bloomfield rallies past Valencia on homecoming 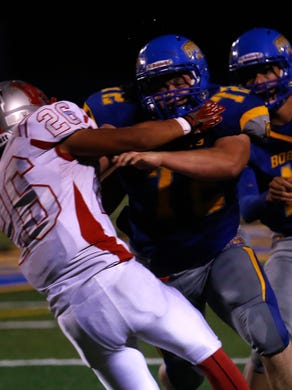 BLOOMFIELD — The Bloomfield football team made its homecoming crowd nervous in the second half, but the Bobcat rushing attack eventually sent those fans at Bobcat Stadium home happy tonight.

In a game that featured five lead changes, the Bobcats (3-2) won their third game in a row, beating Valencia 26-24 after converting on a late-game fourth-and-7 situation followed by a touchdown run inside the game's final minute.

Diego O'Neill — who carried the ball 16 times for 107 rushing yards on the night — received the handoff on a sweep with one minute and three seconds to go in the game. He only needed eight yards for the first down, but he made a couple of nifty moves at the line of scrimmage before following his blockers to a 28-yard run.

Drew Smith broke the plane for a 4-yard, game-winning touchdown run on the next play. When it came time to make the play call with the game on the line, Bloomfield coach Bob Allcorn said he simply went with what had been working for his team to that point.

"We just looked at what our best play had been, and we felt that sweep was the best play," Allcorn said. "When (Valencia) lined up, they were giving up the outside."

Bloomfield struck first in the game, thanks to Rudy Vigil, who looked like he was shot out of a cannon on a 76-yard touchdown run up the left sideline on Bloomfield’s fourth play from scrimmage.

Vigil’s big play would mark the Bobcats' only score of the first half.

The option-based Jaguar offense ran the ball effectively in the first two quarters, but didn’t play a very disciplined brand of football.

Jorge Lopez put Valencia (1-4-1) near the red zone with a 48-yard run on the first play of the second quarter, but two plays later, Jags quarterback Zach Lowe fumbled the ball away.

On Valencia’s next drive, the offense was set back by penalties, but Lowe and the Jags still managed to burn Bloomfield when the senior QB hit Devon Martinez for a 13-yard touchdown out of the flat on fourth and 8.

With 52 seconds remaining in the first half, after Brendon Charley intercepted Lowe, a 23-yard run by Smith put the Bobcats two yards away from a TD. But a crucial illegal procedure penalty pushed the Bobcats back, and with no timeouts remaining, O'Neill was tackled short of the goal line as the clock expired.

Bloomfield was slowed by three illegal procedure penalties before halftime.

"We had some snap issues, getting the ball snapped in time," Allcorn said. "We've got a kid in there who's just playing his second game at center."

Down 8-6 at halftime, Bloomfield came out on a mission, and racked up 122 rushing yards on its first two second-half drives. Both of those drives ended in touchdowns, with Smith breaking loose for a 44-yard run and Vigil earning his second score from 11 yards out.

Bloomfield didn't attempt a pass on its two third-quarter scoring drives — which made the score 20-8 — and Charley didn't complete a single pass all night. Allcorn said he prefers to run the ball, especially if the backs are performing well, like they did tonight.

"We didn't want to be in a situation where we're having to pass the ball. 'Cause for our offense, that's the worst position to be in," Allcorn said. "We want to pass it when we don't need to." 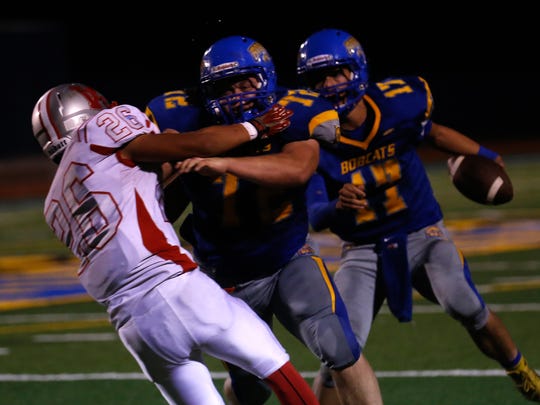 The Jaguars and their dual-threat QB returned the favor by running it down Bloomfield's throat for a pair of scoring drives to retake the lead.

Lowe capped both long drives off with 1-yard TD sneaks. He carried the ball 13 times for 132 yards in the game. Allcorn said he thought his defense had a bit of a rough night, but got better at containing Valencia's running backs after the half. The defense just never managed to shut down Lowe.

"Really, I thought our tackling was just mediocre the whole game," Allcorn said. "And (Lowe's) a very shifty quarterback. I think the adjustments we made just in trying to get guys in the right gaps worked, and their sweep pretty much stopped working. And when it did, I knew the quarterback was going to keep it. He's just an athlete, who went out there and made plays."

Bloomfield took over with 4:22 left in the fourth and rallied until Smith put the hosts up for good.

Smith and Vigil had two touchdowns apiece, and helped the Bobcats rush for 358 yards as a team.

Bloomfield won the turnover battle 3-0, picking off a pair of passes in the win.

The Bobcats stay at home next week, where they'll kickoff their district schedule against Miyamura (4-1).