BLOOMFIELD — David Hawkins and the Bayfield, Colo., football team had their way with Bloomfield tonight at Bobcat Stadium. 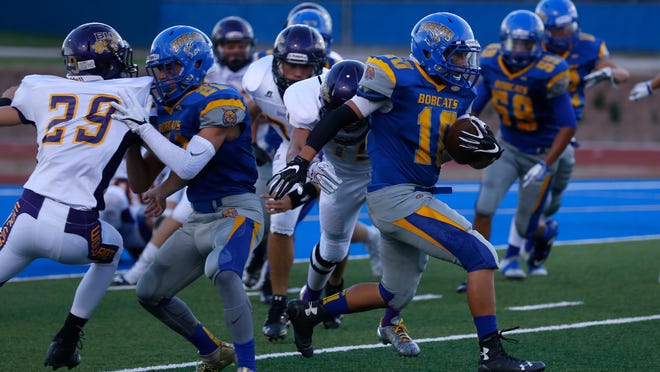 Hawkins, a sophomore, rushed 28 times for 143 yards and four touchdowns for the Wolverines (1-1), who nabbed a 35-0 victory in the Bobcats' home opener.

Bloomfield (0-2) now has scored just once on offense this season, totaling six points over two games.

Hawkins wasn't flashy for Bayfield, last year's 2A state champion in Colorado, but he hit his cutback lanes, ran low to the ground and picked up drive-extending first downs throughout the night. The tailback had 66 yards on the ground when a lightning delay paused the game at the 5:56 mark of the third quarter for more than an hour. He added 77 more yards after that.

Hawkins' three longest runs — one for 11 yards and two for 12 — each came after the weather stoppage. The entire Bayfield team turned the jets on after the delay, more than doubling the 16-0 lead it held before lightning struck. Bloomfield, meanwhile, fumbled a ball away and muffed a punt, which Bayfield recovered.

Allcorn said he thought his team played a better all-around game tonight than it did last week in Belen, but a lack of discipline has been a recurring theme so far this year.

"What they did with their scheme is they were just starting outside and cutting back, and we were just over pursuing," Allcorn said, referring to Hawkins' big night. "That's exactly what I'm talking about — we did not play disciplined. So the cutback lane was there, and that's where he was picking up big chunks."

Two of Hawkins' TD runs came after the lightning delay. Late in the fourth quarter, Wolverines quarterback Josh Westbrook completed a pass to Keyon Prior in the flat, and the speedy Prior accelerated past Bloomfield's linebackers and secondary for a 61-yard score.

The Westbrook-Prior TD connection was one of only seven passes thrown by Bayfield on the night.

The 5-foot-6, 150-pound Rudy Vigil received the lion's share of carries for Bloomfield tonight, but he was able to do little to nothing with them, tallying just 33 yards on 10 totes. As a team, the Bobcats ended up with just 36 yards on the ground.

The passing attack was just as ineffective. Senior quarterback Brendon Charley completed 5 of his 11 passes for just 25 yards. He was also sacked three times and was bullied all night by Bayfield's powerful defensive front.

With eight punts tonight and only one touchdown scored on the season, Allcorn said his offense is going to have start playing in sync before the season gets away from the Bobcats.

Bloomfield heads into a well-timed bye week next week. On Sept. 16, the Bobcats hit the road to take on Bernalillo (0-2).