The Kirtland Central football team had little trouble with Navajo Prep in the season opener, winning 61-13.

FARMINGTON — The Kirtland Central football team had little trouble with Navajo Prep in the season opener, rolling past the Eagles 61-13 tonight at Bronco Stadium in Kirtland.

After receiving the opening kickoff, the Broncos (1-0) needed less than two minutes to find the end zone. KC added to its lead, making it 13-0 midway through the first quarter.

The Eagles (0-1) struck late in the first quarter when quarterback Anthony Pioche-Lee connected with Trayvian Billy on a deep pass to cut KC’s lead to 13-7.

Prep coach Victor Crawford said one of the bright spots on the night was the play of Pioche-Lee.

“He put the ball on guys, and we just didn’t focus enough to catch them. He really looked good, and he was slinging it,” Crawford said of Pioche-Lee. “We just missed a few opportunities. When you playing a big school like that, you have to capitalize on every opportunity, and we didn’t.”

Prep’s score in the first quarter ignited the Broncos, who reeled off five straight touchdowns to take a 48-7 lead into halftime.

Crawford said that the Eagles had chances to find the end zone during KC’s scoring spree, but mental lapses led to dropped passes that could have changed the dynamic of the game.

“All the things are mental. We got fatigued and stopped focusing on catching the ball,” Crawford said. “It’s all mental. I didn’t see anything that was horrible and can’t be fixed.” 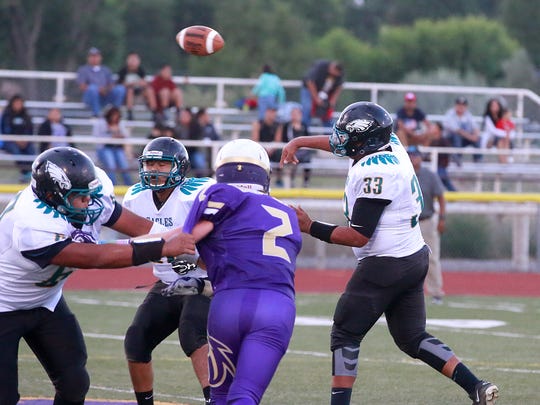 Prep will travel to Cortez, Colo., next week to face Montezuma-Cortez (0-1).

KC coach Greg Jenks could not be reached for comment.