The Lady Scorpions point guard has the green light to pop off quick 3s and also attack the rim head-on. She's posting giant numbers in the process. 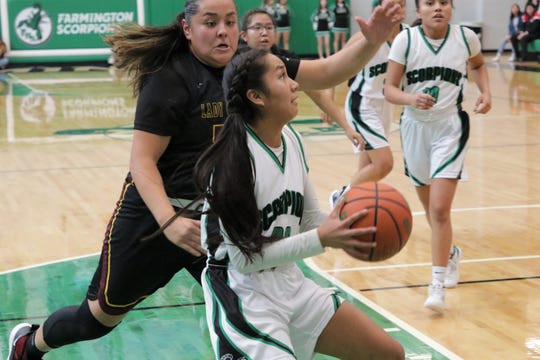 FARMINGTON – Kiiyani Anitielu has been given free rein to run the show and set up quick scoring chances.

The Farmington point guard has the green light to pop off quick 3-pointers from the edges, and to also attack the rim head-on.

“I just have that mentality (to) go to the basket and score,” Anitielu said.

Anitielu is playing on pure instinct, finding any and every possible avenue to get a shot off.

And foes are soon on high alert, sometimes having two or three defenders lock onto to her to simply minimize the damage.

“I take pride in that. That shows that a lot of teams are scared of me,” Anitielu said. “I like the challenge. There’s three players on me, I’ll take it.”

Anitielu can take over games in a hurry, and FHS soon pulls ahead because of it.

“It’s good to see her in that mode... She practices that way, so she’s going to finish that way,” coach Larenson Henderson said. “By far, she’s going to be a star (over the next two years).”

Anitielu’s averaging 26.7 points in her last four games, including a 35-point outburst against Canutillo during the Hobbs Holiday tournament.

Fitting in Henderson’s run-and-gun offense nicely, Anitielu embraces being the focal point setting up different looks flying up and down the floor.

“I love it. I love running the court. These days, teams aren’t really used to that,” Anitielu said. “I can take control over the game, and mostly over the play.”