PV's Elaina Watson has scored in double figures in all but a few games this season. She's also tallied at least several games with six-plus steals. 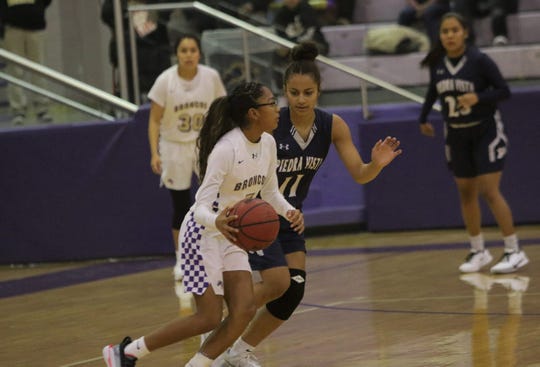 FARMINGTON — Elaina Watson helped the Piedra Vista Lady Panthers open this season on a fast note, with plenty of fast plays on her end.

The PV point guard, who was named the Daily Times athlete of the month for December, has already done plenty of damage on the fast break and in setting up such chances.

She’s swiping at the ball, taking it down the floor for an easy layup. Other times, she’s slashing through lanes off-ball and scoring quick points from there.

Watson, who signed with Adams State University’s women’s basketball program back on Nov. 13, has scored in double figures in all but a few games this season.

She’s tallied at least several games with six-plus steals, including a seven-steal performance in the season opener on Dec. 3 at Kirtland Central.

Valdez was dominant in mid-December, winning back-to-back individual titles in the 106-pound division.

First came his title Dec. 14 at the Bloomfield Invitational, in which he pinned Miyamura’s Rhys Sellers with 15 seconds left in the first period of the 106-pound championship match.

Valdez then won an individual title via 7-0 decision Dec. 21 at the Desert Storm Classic in St. George, Utah.

Anitielu is attacking the rim and getting quick shots off, concluding the holidays with a 35-point outburst against Canutillo, Texas this past weekend at the Hobbs Holiday Tournament.